Burnham and the Star Trek: Discovery crew fought back against the Klingons in Sunday’s climactic fall finale. But did the battle come at too high a cost?

With the Klingons heading for the planet Pahvo, Captain Lorca is ordered to retreat to keep the Discovery‘s spore drive safe. But Lorca doesn’t want to leave the poor Pahvans helpless, so he agrees to head back to the starbase, but uses the ship’s warp drive rather than the spore drive, which gives them a couple hours to figure out the Klingons’ cloaking technology. Burnham finds a flaw in the cloaking device that could be exploited, but they’d need to place sensors aboard the Klingon ship to collect the data necessary to crack the code. So they formulate a plan to draw the Klingons into a fight, forcing them to decloak and allowing Burnham and Tyler to beam onboard. 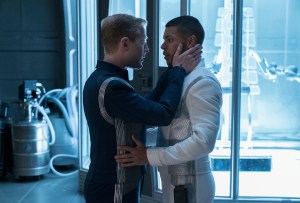 The spore drive is clearly taking a lot out of Stamets; his brain is being restructured by each jump, Culber tells Lorca. (“I’m not ready to play roulette with his brain,” he adds.) But to gather the data they need on the cloaking device, they’ll have to make a few more spore jumps — 133, to be exact, so the Discovery can fully capture the cloaked ship’s coordinates from the sensors. Stamets hesitates at first, but after Lorca butters him up with grand talk of great scientific advances, he caves. (A true science nerd will sacrifice his well-being for great scientific advances everytime.)

Lorca jumps the ship back to Pahvo, where they engage the Klingon ship in a firefight to distract them while Burnham and Tyler beam onboard with the two sensors. They plant one, and need to head to the bridge to plant the other, but first, Burnham picks up a human life sign. They track it to a prison cell where they find Admiral Cornwell — not dead after all! L’Rell the Klingon is in there, too, and when Tyler spots her, he freezes in fear, flooded by memories of the torture she put him through. Burnham stuns L’Rell with her phaser, but Tyler is stuck in a PTSD-induced paralysis, so Burnham has to make her way to the Klingon bridge alone.

She manages to sneak onto the bridge and plant the sensor, and the Discovery commences its 133 spore jumps, with Stamets clearly suffering throughout. (Culber wants to stop, but Lorca says the mission is too important.) Kol eventually discovers Burnham and taunts her, picking his teeth with Georgiou’s old Starfleet insignia. She announces she’s the one who killed T’Kuvma, and when Kol tries to take her prisoner, she challenges him to hand-to-hand combat instead. Intrigued, Kol tosses her a Klingon blade, and they proceed to spar back and forth, with Kol’s minions looking on. 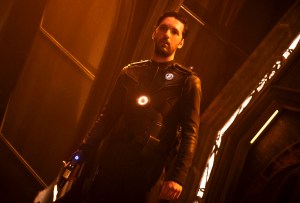 Tyler finally shakes off his PTSD, thanks to Cornwell’s patient guidance, and fends off a couple of Klingon guards while Burnham tussles with Kol. The fight lasts long enough that the Discovery gathers all the data it needs, and beams Burnham back while she’s in mid-air. They beam Tyler and Cornwell back, too — along with L’Rell, who jumped into the transporter beam at the last second. With the data processed, Lorca is able to lock onto the Klingon ship while it’s cloaked and blow it to smithereens. Burnham has mixed feelings about it, though, since that’s the ship where Georgiou died; she watches the explosion while running her fingers across Georgiou’s insignia. (Saru sees this, and acknowledges her with a solemn nod.)

Cornwell is recovering, Pahvo is safe and Starfleet thanks Lorca for his service. A happy ending, right? Well, maybe not: Tyler is still haunted by what L’Rell did to him — including some graphic, and non-consensual, Klingon sex — and confides in Burnham, adding that he’s happy all this led him to her, at least. She tenderly comforts him, and they kiss, but late one night, he heads to L’Rell’s cell, demanding to know: “What did you do to me?” L’Rell tells him: “Do not worry. I will never let them hurt you.” (Wha? Who’s “them”?) He gets called away to the bridge, but before he leaves, she says, “Soon.” (Hmmm…)

Stamets managed to survive that dangerous burst of spore jumps, and Lorca tells him he deserves a medal: “We’re gonna win this war because of you.” He asks Stamets to do one last jump, though, just to get them back to their starbase… and you might be able to guess where this is going. The jump goes wrong, with Stamets crying out in pain. He collapses, rambling about “infinite permutations,” his eyes turning a ghostly light blue. The ship ends up in a far-flung sector, with the wreckage of old ships floating around them. “I’m afraid I don’t know where we are,” Saru tells Lorca. And there’s your fall-finale cliffhanger, folks.

* That officially wraps up the first chapter of Discovery‘s freshman voyage; it returns on Sunday, Jan. 7 with six more episodes. And yes, it’s already been renewed for Season 2.

* What’s going on between Tyler and L’Rell, exactly? “Soon” seemed to imply they have some kind of secret plan they’re working on together. Is Tyler a Klingon mole that she’s brainwashed into infiltrating Starfleet for her? I’m keeping a close eye on those two.

* Security on that Klingon ship was shockingly lax, I thought, with Burnham and Tyler waltzing around undetected. (I know they had transmitters that made their life signs read as Klingon, but still.) Shouldn’t there be Klingon patrols looking out for that kind of thing, even — or especially — during battle?

* Why, oh why, did Stamets have to do that last spore jump? The Klingon threat was neutralized, and they could’ve just traveled back to the starbase using the warp drive. Oh well. We had to know something bad was going to happen to Stamets when he started making plans to go to the opera with Culber. I’ll say it again: Never make plans for the future on a TV drama. It always leads to bad things.

* A Starfleet ship and its crew stranded in the far reaches of space, with no way to get back home… isn’t that the plot of Star Trek: Voyager?

Alright, Trekkies: Give the Discovery fall finale, and Season 1 so far, a grade in the polls below, then beam down to the comments to share your post-finale thoughts.