That sound you didn’t hear on Thursday night was the collective Arrow fan base not gasping at the reveal of Vigilante’s identity.

I, for one, never let myself get invested in this unmasking, as I never found the character to be terribly interesting but more of a sideshow to the far more engaging events of the Adrian Chase-centric Season 5. Even so, “some” were curious, so I and peers from other sites would ask Arrow showrunners Marc Guggenheim and Wendy Mericle the requisite Q during interviews, resulting in teases such as:

The reveal of who is he will take everyone by surprise.

He’ll have a really cool story line, not just in respect to the city, but also with respect to a particular member of the team.

Who he is and what he’s up to is very personal. He’s got a very close connection to one of our series regulars that I really hope will blow the fans’ minds.

Interestingly, Guggenheim at one point told an outlet, “As a general rule, I’m not a fan of mystery characters who when you take off the mask the audience goes, ‘Wait a minute, I’ve never seen that person before in my life.’ I’m probably not spoiling anything by saying whoever’s underneath the Vigilante mask, you’ve seen that person before.”

I went into Thursday’s episode with what turned out to be the significant advantage of knowing who was going to be revealed as Vigilante. Meaning, Dinah’s ex, former CCPD detective Vincent “Call Me Vinny” “No, Call Me Vince” Sobel. But given that A) they switched actors since Dinah’s February flashback and B) the “Previously On…” for once didn’t hammer us on the head with a callback to said backstory, most everyone else was left to respond, “Wait a minute, I’ve never seen that person before in my life.”

What I’m getting at here is no reflection on Dinah nor her portrayer, Juliana Harkavy. Quite the contrary. All told, I’m very pleased that Dinah this season is more strongly embedded with Team Arrow, to the point that she can argue tactics or question Diggle about his own secret-keeping. Confidence wears well on her. But seeing as we the viewers have only known the new Canary for a hot minute, I’m not intrigued by the fact that this rather interchangeable adversary — Ooh, he’s good at close-quarters combat! That’s new! — who we’ve seen a handful of times is her “dead” partner/boyfriend. (Nor do I buy Vince’s first pass at an explanation for keeping Dinah in the dark for years.) 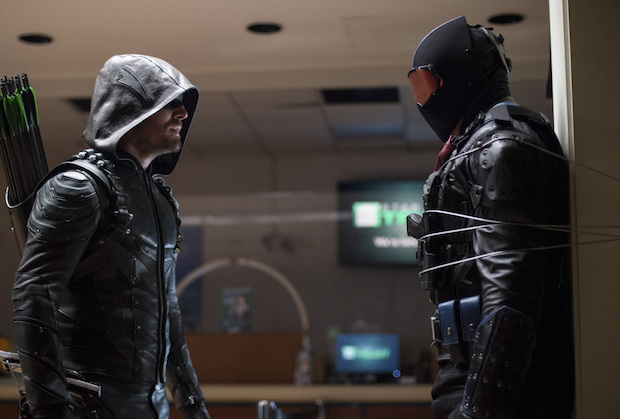 The problem with any Arrow-verse unmasking is that over time, theories amass. And the more theories you have, the better chance that a chunk of them will prove better than the ultimate reality. I’ve tweeted in jest on multiple occasions that Vigilante would turn out to be Joanna de la Vega, Laurel’s former CNRI colleague — just because the notion was random to an absurd degree. And yet if it was Jo wearing the ski goggles this past Thursday, I would have been more intrigued. (For one: How did she adopt an unarguably manly physique beneath the costume?) Even the fan theory that Stephen Amell favored — Oliver’s Season 1 flame, McKenna Hall — would have delivered on that “Ohhhh…” moment.

Others out there, taking the guessing game far more seriously, put SCPD Captain Pike in the mix, which would have had a modicum of weight to it, given his anti-vigilante stance. Of course many hoped against all hopes it would be a Tommy Merlyn (from our Earth or another), though practicality tells us that Colin Donnell (now on Chicago Med) would be available for mayyyybe three appearances (the typical max for a series regular being lent to another series), and what a tease that would have been.

At least Arrow didn’t ask us to buy that Curtis’ ex-husband Paul, who maybe weighs a buck forty, had bulked up, suited up and hypocritically gone rogue as Vigilante. Or worse, that Vigilante is Dan Humphrey.

Pulling back for a moment to take stock of the storyline we now have before us, I do get it. Just as Diggle has been compromised by his injury (and the sketchy means by which he’s treating it), Dinah too now has a vulnerability, having let Vince get away not once but twice. Just as the proper introduction of Cayden James led Felicity to tell some white lies. A theme is at play, and hopefully how the Vigilante story actually plays out will pleasantly surprise those who were nonplussed by his punim alone.

Who was your No. 1 Vigilante theory going into Thursday? And to answer our headline: Is there anyone else we’ve (technically!) met before that would have been even more underwhelming?