‘Twas ultimately a test of regular, human wills as Marvel’s Inhumans brought its eight-episode run to a close on Friday night. In the end, who was left standing as the king of Attilan?

Reassembling on Attilan, Black Bolt, Medusa and Crystal went to put an end to Maximus’ power play, only to learn that the self-installed king had put a fail safe in motion — if he doesn’t scan his palm at the control center every hour on the hour, the dome that protects their city from exposure to outer space will decompose.But left unchecked, Maximus’ plan is to expose himself anew to Terrigen, and then lead his people back to their home on Earth, as a conquering army. Though Maximus would soon realize, the Terrigen stash has gone missing (delivered by Medusa to Louise on Earth for safekeeping. In trade, Medusa gladly agreed to bring Louise’s “dad” to the moon, if not the astrophysicist herself). 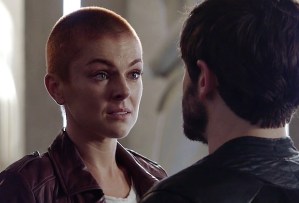 Back on Attilan, Medusa made a fervent attempt to dissuade her onetime friend from his folly, but to no avail. Even when she offered the last Terrigen crystal to him, he did not budge but demand she turn it over. Instead, she smashed it against a far wall, leaving Maximus to pathetically, unsuccessfully scramble to inhale its gas.

Black Bolt met up with Karnak and wonky, resurrected Gorgon at the control center, only to learn that Karnak had no way to hack Maximus’ fail safe. And sure enough, the protective dome started getting glitchy. The royal family then pursued the only hope for their people, by leading them to Eldrac for teleportation to Earth, while Black Bolt stayed behind to deal with Maximus.

Brother vs. brother, Maximus revealed a dark truth — that when they were boys, he forged the document suggesting that their parents had ordered brain surgery for Black Bolt. And since it was that discovery that led to Black Bolt’s uttered “Why?” that disintegrated their folks, they died for nothing, Maximus taunted. He then awaited his own deadly blow via Black Bolt’s voice, but instead got his lights knocked out. He later came to in the bunker, where Black Bolt locked him in left him to rot (as foreseen, “the king of Attilan”!) as the city came crumbling on top of him, helped in part by Black Bolt’s parting, “Good-bye, brother.”

Eldrac, with his own dying… whatever, transported Black Bolt to Earth, where the former king reunited with everyone and invited wife Medusa to deliver the welcoming pep talk. She acknowledged that while they face an uncertain future (as Black Bolt noted earlier, they perhaps have traded one enemy for another), they face it together, with hope… “here, on Earth.”