Annie Potts’ introduction as Meemaw was overshadowed by a trip to the emergency room in this Thursday’s Young Sheldon.

In “Poker, Faith and Eggs,” the Designing Women alum made her series regular debut as Sheldon’s beloved grandmother — but the real story here involved George Sr., who as well established on The Big Bang Theory isn’t long for this world. His mortality cast a shadow over the entire episode, and for good reason: Mary escorted him to the emergency room after he began complaining of chest pain, and what is ultimately diagnosed as a minor heart attack gave the entire family a major scare.

Georgie was especially on edge after learning his father was in the ER. Once Meemaw fell asleep, the 14-year-old stole her car keys and drove to the hospital with Sheldon and Missy in tow. When Meemaw woke up to discover her grandkids gone, she hightailed it to the hospital and lied to Mary about driving the kids there herself.

At the hospital, Sheldon stumbled upon George’s room and saw various nurses working away on his dad. Mary had a tight grasp on George’s hand, and he appeared to be experiencing severe discomfort. It was a powerful moment not at all played for laughs, and Sheldon looked positively petrified. 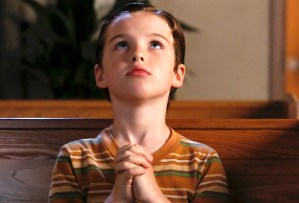 The young brainiac eventually made his way to the hospital chapel to say a little prayer for his dad — but since he doesn’t believe in God, he instead prayed to the French mathematician/Catholic theologian Blaise Pascal. Confused much? Allow Adult Sheldon to explain:  “My thinking was, if [Pascal] was right about the existence of God, then he could pass along my request for my dad to get better.” (Aw!)

George pulled through, of course, but there was a sense of sadness as a viewer knowing that tragedy awaits the Cooper family within just a few years time.

Were you surprised to see Young Sheldon tackling George Sr.’s deteriorating health this soon into its run? And what did you think of Annie Potts as Meemaw?