GLAAD’s “Where We Are on TV” report for a second consecutive year forecasts an all-time high in the number of lesbian, gay, bisexual, and transgender and queer (LGBTQ) characters on TV, and for the first time ever was able to tally characters who identify as non-binary and asexual.

That said, there are still strides to be made when it comes to the diversity and perceived expendability of LGBTQ characters.

“The LGBTQ characters who make it to TV screens tend to be white gay men,” notes GLAAD president Sarah Kate Ellis, whereas LGBTQ women actually outnumber men and bisexuals in the U.S. All told, “It’s long past time for television to introduce more diverse LGBTQ characters on multiple levels,” including those with disabilities and of diverse religious backgrounds.

Broadcast TV’s representation of LGBTQ characters in the 2017-18 TV season if forecast to be 6.4 percent (or 58 out of 901 series regular roles), up 1.6 points from 2016 to mark a high. (Broadcast TV also will have 28 recurring LGBTQ characters.) The CW ranks highest with 11 percent, followed by Fox (10), NBC (5.3), ABC (5) and CBS (4.2). Cable TV went from 92 to 103 series regular LGBTQ characters, plus an additional 70 recurring; Freeform, with 25 (including cable’s only asexual character in Shadowhunters‘ Raphael), and Showtime, 21 (including Billions‘ non-binary Taylor), are the most inclusive. Streaming services such as Netflix, Amazon and Hulu add 51 regulars plus 19 recurring, generally ticking up year-over-year. 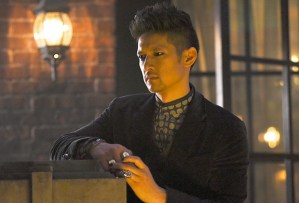 On broadcast TV, gay men make up the majority of LGBTQ characters (at 47 percent, down a tick from last year), while lesbians account for 24 percent — up sharply from last year’s 17 percent (but still shy of the 33 percent forecast for 2015-16). Bisexual representation among all TV characters (broadcast, cable and streaming) dipped to 28 percent, with women (75 total) outnumbering the men (18) by a markedly higher margin (81 percent) than reflects actual society (64 percent). The number of transgender characters improved by one, though that was offset by the loss of one due to series cancellation. Cable and streaming each have one asexual character, while broadcast has none (and to that end, GLAAD encourages Riverdale to tell that part of Jughead’s story from the comic books).

On a qualitative note, GLAAD observes that “queer and trans characters tend to be just one among many in an ensemble, and this leads to LGBTQ characters being treated as expendable when a show needs to downsize” — as evidenced by the “Bury Your Gays” trope that was highlighted in last year’s report.

The “Where We Are on TV” report also takes stock of the representation of all people of color, which this year rose to 40 percent on broadcast (led by NBC, followed by ABC, Fox, The CW and then CBS). Of that group, the number of black characters is down, Latinx is steady and Asian-Pacific Islander representation is up. Yet despite that trend, the racial diversity of LGBTQ characters slipped on broadcast TV, from 42 to 36 percent. On this front, streaming also declined (to 23 percent), while cable improved (to 35 percent).

Broadcast TV’s representation of women dipped to 43 percent of series regulars — whereas the country’s population is 51 percent female. The largest discrepancy occurs among characters of color, where only 35 percent are female.

Lastly, TV’s representation of characters living with a disability — including non-apparent ones such as HIV, bipolar disorder, OCD and PTSD — rose to 1.8 percent but remains “shameful overall,” the report notes, compared to the real world’s 12.8 percent.

“Where We Are on TV” forecasts are based on scripted series which aired or are expected to air in primetime between June 1, 2017 and May 31, 2018.