This week on The CW’s Arrow — almost a year to the day that Oliver & Co. first ran up against Vigilante — the masked menace’s identity was finally, as promised, revealed.

And lurking beneath that mash-up of leather, neoprene and ski goggles is… Dinah Drake’s former CCPD partner and boyfriend, Vince Sobel (now played by Eastwick‘s Johann Urb). Dinah back in 2013 was left to watch helplessly as a thug shot Vinny in the head, right in front of her. But it turns out that Vince  himself was turned into a meta by the dark matter wave that gave his gal a sonic scream, and as a result became rather indestructible, as revealed during their second face-off. 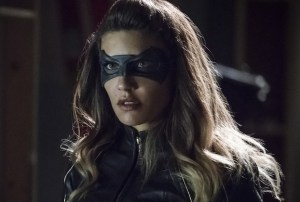 “I think it was around Episode 3 that [supervising stunt coordinator and sometime-director] James Bamford came and told me, ‘OK, this is what’s happening…,'” Juliana Harkavy, who plays Dinah, shared with reporters on set this week. “It was a shock, but it seemed to fit, and I could make it work in my wheelhouse of what is real for Dinah. So I was excited about it. I love the storyline.”

Dinah herself may feel differently about it all. Withholding the fact that she let her “resurrected” beau — whom she previously derided as a “psychotic killer” — get away after learning of his meta status/vigilante “mission” will weigh heavily on Team Arrow’s new Canary.

“It’s definitely a bit of a glitch in her path, because now, in a sense, not only is she dealing with her past, but she also has her own little secret that she has to decide whether she’s going to keep from the team,” says Harkavy. “It definitely throws a wrench in her life and her game plan.”

For how long can Dinah — who in recent weeks has freely lectured Diggle about his own cover-up — actually withhold the fact that she let him get away? “I don’t think it’s really in her nature to keep [this secret] for long, but she’s going to keep it as long as she feels that she is protecting herself and, I think, the team to some extent,” Harkavy offers. “She wants to figure out really what’s going on before she says anything…. She’s going to take her time with it for a second.”

And even if Diggle specifically was to discover what Dinah is hiding? “Dig will have something to say about it,” ventures David Ramsey, “but you know, Dig can’t talk too much in terms of secrets. I don’t know if he really has a moral leg to stand on.” 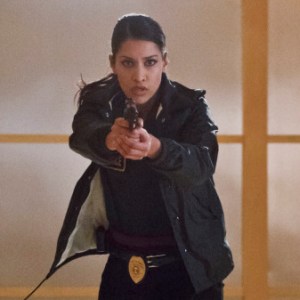 As noted above, numerous theories on Vigilante’s identity were shared over the past 12 months  — a few of which in fact suggested Dinah’s “dead” ex. But the one that Arrow star Stephen Amell latched onto proved not to be true.

Says Amell, “I was upset that it wasn’t McKenna [Hall],” the SCPD detective that Oliver dated during Season 1, played by Janina Gavankar. “I always thought that it was a really cool fan theory.” (Reporting by Vlada Gelman)