Whew… have you caught your breath yet? 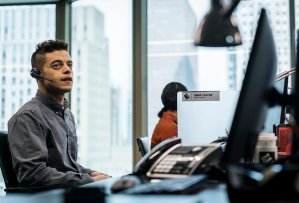 Wednesday’s Mr. Robot was a pulse-pounding tour de force — the pace was so relentless, there wasn’t even time to stop for commercials — with Elliot racing to prevent the Dark Army from executing Stage 2, all while E Corp security tried to remove him from the building. After they finally did, Angela stepped up and executed a Dark Army hack in his absence, paving the way for Stage 2’s imminent building explosion. But her victory came with a cost: Elliot found out from Darlene that Angela’s been working with the Dark Army, and tracked her down by episode’s end, asking her, “Is there something you want to tell me?”

TVLine reached out to Portia Doubleday (Angela) to talk about tonight’s episode, and she took us inside the process of filming all those long takes, as well as explaining what might be motivating Angela to join up with the Dark Army, where Elliot and Angela could go from here… and why Angela had that “Property of Josh Groban” sweatshirt lying around.

TVLINE | This must’ve been an intense episode to film. It plays out in real time, and it looks like it’s all shot in one take.
Yeah, one-ers [scenes shot in a single take] are really tricky. It was definitely a discovery process. I had done a one-er in Season 2, which was also a hack sequence, and it was so hard. [Creator] Sam [Esmail] said this year I wasn’t allowed to wear heels, because when we were doing that one-er, I had to run for, like, five minutes. We must’ve done that take for at least six hours, so by the end, I had to ice my feet, and I was bleeding. [Laughs] He’s like, “You’re not wearing heels next season!” And I was like, “Fine, I’ll settle for a platform!”

The really cool thing about doing one-ers is: It’s kind of like theater. There’s not a break in the energy. And if one thing goes wrong, if your hair is in the wrong place… I remember last year, my headphones were swinging in a weird way, so we had to redo it. Just the choreography between you and the camera operators, who did such an incredible job… It’s kind of like a game, in a weird way. I had to memorize twenty cues: left foot, right foot, move back, then move forward, right hand on the door… and then all the hacking stuff, I had [co-producer] Kor [Adana] in my ear. He helped me, but I had to get all of those correct. There’s no room for messing up. You don’t want to be the one that messes up, because then it’s like, “C’mon!” [Laughs]

TVLINE | I was going to ask you if you could explain what Angela actually did to that server. So you had someone in your ear prompting you?
I wouldn’t be able to do it. It wasn’t as hard as I thought it was going to be, once you memorize all the cues. I had the instructions, and they’re written out, even though it’s in a lot of technical jargon that’s difficult for me to comprehend. Having Kor in my ear, I just memorized whatever he was telling me to do. Because in real time, I could hear him. That’s also what makes it really fun, in an FBI kind of way. It’s like you’re having this secret agent talk to you, and nobody knows. Kor is like a mastermind. He definitely knows all the technical stuff, the hacking side of things. He’s a little bit of a mystery. I’m intimidated by Kor, because I secretly think he’s a hacker. Like, a real one. I’m like, “Well, if you know how to do this stuff, and all your friends are in this world… can you hack people’s text messages?” He knows a lot of inside things that are worrisome at times. 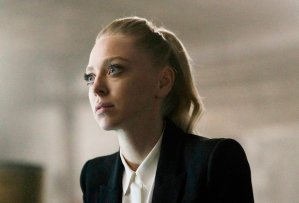 TVLINE | We still don’t fully understand why Angela is working with the Dark Army. She told Elliot there was a way they could undo everything, including their parents’ deaths. Is there a revelation coming on that?
When we started this season, [Sam] didn’t tell me everything. He told me just enough information to justify what I’m doing. But yes, you will definitely have more information at the end, as to why she’s been doing what she’s been doing. Obviously, something transpired between her and Whiterose in that meeting. Sam has a talent for unraveling information without giving you exactly what you expect. So it’s not necessarily something linear, like, “Oh! This is it!” But you get a lot more gratification, I think, as to why this has been going on… which is revealed in later episodes.

TVLINE | But it seems like Angela is still conflicted about her Dark Army association. She doesn’t want anyone to die.
Yeah, Sam and I talked about that a lot. There is a part of her that’s hesitant. There’s a part of her that’s still kind of contemplating her actions, but at the same time, really believes in what she’s been told, and what she saw. I mean, there’s no faith without doubt, and I wanted to make sure there were moments where she has a little bit of doubt about what she’s doing. Even the moment where she’s done with the hack, it’s incredibly emotionally taxing for her. I think she starts to crumble with the weight of this secret, and that’s why she wanted to tell Elliot, and couldn’t, in that moment. And then she ultimately realizes she can’t share that with him, for a multitude of reasons. But I definitely think it’s weighing on her, and you start to see a little bit of that unraveling this week. 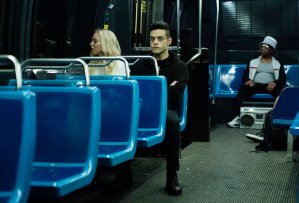 TVLINE | What is Angela’s relationship with Elliot going to look like now? He’s had romantic feelings for her before, but can he ever really trust her again?
This is what I’ll say: I think that they are very analogous characters. There are a lot of parallels between these two people, because they both want the same thing. They’re just going about getting it in two completely different ways. Elliot is the only person who’s close enough to understand Angela, and why she’s doing all of this, and I think that causes a lot of tension in their relationship. They both share the tragedy of losing a parent, and how much that compromised their lives. He’s the last link for her to that time, and to understanding why she might be that way. I think that the core of who she is is someone that he trusts… but I don’t know exactly what’s going to happen. I’ll be interested to see.

TVLINE | Finally, I have to ask you about that “Property of Josh Groban” sweatshirt Angela gave Elliot to wear in the premiere. Has Angela been a secret Groban fan this whole time?
That actually was [her ex-boyfriend] Ollie’s sweatshirt! Ollie was a big Josh Groban fan, and the only sweatshirt that she happened to have around that would fit him was her ex-boyfriend’s. I don’t know that she was so much into Josh Groban. I don’t think she came home from a concert and was like, “I need a men’s sweatshirt.”

Got thoughts on this week’s Mr. Robot, and Angela’s master plan? Drop ’em in a comment below.