This week on The Flash, Iris, Caitlin, Cecile and a visiting Felicity let loose with some girl power, while Ralph turned Barry’s bachelor party into a real… bender.

Though the episode’s titular “Girls’ Night Out” was heralded in promos, Iris’ actual bachelorette party was cut very short by the intrusion of Caitlin’s former “colleague” Norvok, who revealed what’s been hiding behind his one milky eye — a reptilian tentacle akin to what The Strain‘s strigoi pincher. Sufficiently taunted, Caitlin went Frosty in front of her friends, using an ice blast to get rid of Amunet Black’s errand boy. 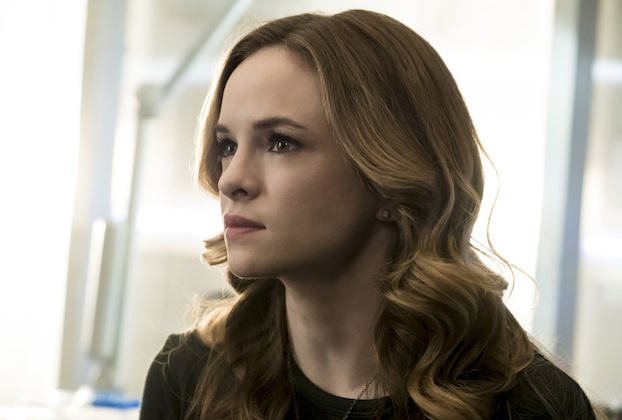 Retreating to S.T.A.R. Labs, Killer Frost explained to the other ladies that Caitlin was planning to hightail it out of town, having gotten herself into something she couldn’t get out of. When Cecile noted that they were dealing with the same ice queen who kidnapped her last season, Iris countered that Caitlin was being manipulated by Savitar at the time, and in the end helped the team defeat the speed god. After Frost changed into a “cooler” outfit in which to confront her old boss, Iris followed, ultimately interrupting a very intense exchange where Amunet showed off a new meta dubbed The Weeper and seemed poised to do something to Frost with a bucket of metal shards.

Back at S.T.A.R. Labs, Frost explained how Caitlin months ago had gotten wind of some tech Amunet had that could keep her meta inclinations in check, but in trade she worked as (non-lethal!) “muscle” for the leader of the underground market. Moments later, Iris in private questioned Frost’s plan to escape to another Earth, saying that there is a part of her that is “good and decent” and she just needs to accept it — that she is as afraid of becoming Caitlin as Caitlin is afraid of becoming Killer Frost. Iris’ words seemed to land, but Frost still froze her out, heading off to a meeting with Amunet.

This go-round, however, Amunet would score a win, using her own meta ability to turn the bucket of shards into a gauntlet of sorts, from which she can shoot metal daggers (jabbing Frost once) or use it as a hella boxing glove (which she did, lots, on Frost’s face). Afterward, Iris found bloodied and bruised Caitlin at S.T.A.R. Labs, thawed out and sewing up a wound. As Iris offered to close the knot, Caitlin explained that Julian’s cure didn’t completely work, so she kept her distance — until Cisco asked for her help in freeing Barry from the Speed Force, and she saw an opportunity to make up for some of the trouble she caused while under Savitar’s way. When Iris suggested that she could have served as a sounding board, Caitlin noted that after all these years, they never became more than “work friends” and certainly have never been “besties” — and Iris could only concur.

Toward episode’s end, and with Caitlin recusing herself from the mission, Iris, Felicity and Cecile (working comms) sought to stop Amunet’s sale of The Weeper and his drug-like tear supply to a buyer. When Black’s goons got the drop on stealthy Iris and Felicity, Killer Frost showed up after all, to save her friends by shielding them from Amunet’s gauntlet with an ice dome. Iris meanwhile instructed Cecile to remotely switch on an industrial magnet hanging overhead, which effectively ripped away Amunet’s gauntlet. Frost may have won this round, Amunet allowed, but the two of them are far from done. (The Weeper meanwhile waved off  the ladies’ offer of help and skedaddled, only to later get nabbed by The Thinker, who “created” him in the first place.) 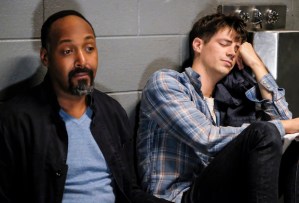 After briefly meeting up with the fellas — whose bachelor party got hijacked for the worse by Ralph Dibny, and during which a drunk Barry got both yappy (“I’m The Flash!”) and sappy (“Why didn’t Rose make room for Jack on the door?!”) — Iris told Caitlin that they should “do it more often,” meaning hang out as gal pals (not almost get killed). Iris then extended the olive branch even further, inviting Caitlin to be her maid of honor, now that they are “more than work friends.” And Caitlin accepted. (Though I still hope she also serves up a custom ice sculpture, as offered.)

Elsewhere in the episode: During the fellas’ unplanned visit to The Golden Booty (where “No. 1 Customer” Ralph got Barry, Cisco and Joe roped into a brawl and then thrown into the clink), Joe was gobsmacked to see Cecile’s daughter up on stage! Before Joanie could shimmy one bit, she sat with Joe to explain that hers was a mission of controlling the female empowerment narrative (or something), by demonstrating that a strong woman can wear a gold bikini just as easily as a pantsuit (or something). Joe left the secret as one for Joanie to tell her mother, in part because he himself, as later shared with Barry, is already dazed by the prospect of being a new dad, again. Barry assured Joe he will do just fine this time around since he won’t be going solo as in the past. Easing his mind more, Cecile shared that she herself is similarly freaked out.

What did you think of the “Girls’ Night Out”? Were you glad to see Iris and Caitlin say some of the things that needed to be said?