It’s a bird, it’s a plane, it’s… spoilers from Monday’s episode of Supergirl! Divert your eyes if you don’t want to know what went down.

Just one week after determining that Maggie not wanting kids was a deal breaker, Alex made the painful decision to end their relationship on Monday’s Supergirl.

To be fair, a lot of other insanity happened this week — Morgan Edge attempted to frame Lena for poisoning a bunch of children (when it was really his doing), James was shot at a press conference, and Sam discovered that she’s apparently bulletproof — but all that took an understandable backseat to what happened between Maggie and Alex.

Below, executive producer Andrew Kreisberg discusses the events leading up to tonight’s big split, as well as what the future holds for “Sanvers”:

TVLINE | I’m not going to lie, I wasn’t expecting the split to go down that way, with them still loving each other but not being able to past this one thing. Why was it so important that this issue be what drives them apart?
We went into Season 3 knowing that Floriana was only going to be available to us for five more episodes, but we’d spent an entire year having this couple fall in love and go on all these adventures together, so we were sort of in a bind. We made it clear that we weren’t going to kill Maggie, because that was the easy way out. And unlike in the ’80s, where characters would say, “Oh, I got a job in another city and I have to move,” that felt like a real cop-out. We’d also discussed not [breaking them up] and just having Maggie off-camera, but that felt like a disservice to the fans. So we had to decide how we were going to end it with it still feeling real and emotional, but also honor everything that came before it. 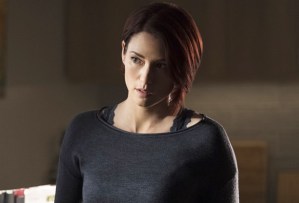 From my own life, I was in a committed relationship with someone once for a while, and she really didn’t want to have kids or get married. It came to a head for us, and I realized I did want those things, so I broke up with her even though I was in love with her. It wasn’t easy, but it was ultimately the right thing to do. And one of the other writers had a similar experience. So we decided to take from our own lives. We looked back at when they got engaged: Yes, they loved each other, but it was also partly precipitated by the world almost ending, so there might have been a couple things they hadn’t locked down. It was important to us that no one be the villain. We’re not making a judgment call about Maggie not wanting kids, nor are we saying that Alex is a hero for wanting them. This is Maggie’s truth and Alex’s truth — unfortunately, they don’t coincide. The more we talked about it, the more we felt it was a real story, as well as one we hadn’t seen on TV before. So we set about crafting it as honestly and truthfully as we could.

TVLINE | The fans have also known that Floriana was leaving since May. Did that make it easier for you to write the story since they had time to prepare themselves, or harder because it gave them more time to speculate?
I’m obviously respectful of the fans, but at the end of the day, we have to tell the stories we want and need to tell. So we sort of put that out of our heads. We knew what we were doing was respectful of Alex and Maggie’s relationship, and we felt that it was respectful of how much the fans care about these two characters. It was our firm desire that Floriana would stay and we would have, as Alex said, the “biggest, gayest wedding National City has ever seen.” But it wasn’t to be, so we felt like this was the best story we could tell.

TVLINE | Given the way they parted, I have to imagine they’ll remain in each other’s lives in some way. I don’t see them making a clean break.
Well, most of this season has been dealing with Kara’s loss of Mon-El, and I think we would be doing a disservice to how much Alex and Maggie care about each other if this wasn’t a similar depth charge dropped into Alex’s life. Maggie as a concept is definitely not gone — Alex will be dealing with the consequences of losing her for the next bunch of episodes. There’s actually an episode coming up where Maggie reaches out to Alex by text, and it kind of has a profound impact on Alex. She may be gone, but she’s definitely not forgotten.

TVLINE | So we can expect a lot more drinking on Alex’s part?
Yes, but I also don’t want people to think the show is going to become a major downer all of a sudden. Some of the most fun episodes we’ve ever done are coming up. They’re just dealing with the grief in the midst of the fun.

Your thoughts on Alex and Maggie’s split? Drop ’em in a comment below.