The episode, titled “Three Directors,” tells the story of Angela firing Peter from the brewery in the style of three different big-screen visionaries: Quentin Tarantino, Wes Anderson and Michael Bay. And while there’s obviously a bigger payoff for viewers familiar with the directors’ work, you needn’t fancy yourself a film buff to enjoy the episode.

“We tried to write it in a way where even a casual movie viewer would still get a lot of the jokes and references,” executive producer Steve Callaghan tells TVLine. “You don’t have to be a hardcore aficionado of any of these directors to understand it.”

As you might expect, the Tarantino segment is the bloodiest of the three; I’d even go so far as to call it one of the most violent things I’ve seen on network television. Check out an exclusive clip of that segment below:

“We had a number of conversations with our Standards and Practices department to make it something they felt comfortable putting on broadcast TV,” Callaghan says. “There were versions of this episode, and that segment in particular, that were even more violent.”

Speaking of elements that were cut from the episode, Callaghan says that these three directors weren’t the only names tossed around the writers’ room. “I think Woody Allen’s name came up, along with a few other people,” he recalls. “But these are the three we felt were different enough from each other, and for each one there was a specific comedic angle we could approach it with.”

Callaghan does have one confession to make about the episode, though: It begins with Peter saying that Family Guy producers contacted Tarantino, Anderson and Bay to see if they would actually contribute to their segments — which the EP admits is “a little bit of a white lie.”

“There was a point when we considered [asking the directors],” he says. “That idea was tossed around. But we didn’t want to run the risk of them saying no. We also decided it would be more fun to do our own version of what we thought these directors would do with the premise.” 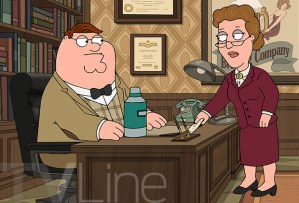 It should also be noted that “Three Directors” marks one of the final appearances of Angela (voiced by Carrie Fisher, who died in December). She’ll be seen again in the Christmas episode, airing Dec. 10, and Callaghan tells EW that Angela’s fate will be addressed in an episode this fall.

Hit PLAY on the preview clip above (if you haven’t already), then drop a comment with your thoughts below.