The original Jack Dalton is set to resurface on CBS’ MacGyver reboot.

TVLine has learned that Bruce McGill, who costarred as the wise-cracking soldier of fortune on the ABC series that ran from 1985 to 1992 (see photo below), will guest-star on CBS’ MacGyver on Friday, Dec. 15 at 8/7c. 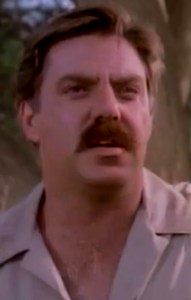 With George Eads busy playing the new incarnation of Dalton, McGill will fill the role of Detective Greer, a seasoned LAPD veteran who reads Mac his Miranda Rights. Not knowing who MacGyver really is, Greer believes that he is a bomb maker who took down a warehouse, killing someone, and intends to charge him with domestic terrorism.

McGill’s more recent TV credits include a seven-season run on Rizzoli & Isles followed by episodes of Blue Bloods and NCIS.

“I was happy to make a guest appearance on MacGyver,” he said in a statement. “It’s unusual for an actor to be on the original series and then, 30 years later, be on a newer version. The cast and producers were warm and embracing, and I enjoyed being a part of the new show.”