Warning: The following contains spoilers for the fall finale of Will & Grace.

Adios, Rosario. As the promos for Thursday’s Will & Grace had so heavily hinted, Karen’s maid, sparring partner and mother figure didn’t survive the fall finale.

Sure, “Rosario’s Quinceanera” started off frisky and funny, with Karen assuming that, since her cleaning lady had gone AWOL, it must be “Maids Eat Free Day at Applebee’s” or something. And when Rosario finally phoned, her boss turned the snark up to 11, warning that she’d “better be in the hospital.” The thing was, she was — she’d had a heart attack!

In the waiting room, while Jack played out the “Give my daughter the shot!” scene from Terms of Endearment, substituting Rosario’s Jell-O for painkillers, Grace, as is her habit, made the crisis all about herself (right down to manufacturing symptoms of a coronary). In fact, the only thing that distracted her from her imaginary chest pains was Will’s revelation that he’d signed a lease on the office next to hers, thus doubling their business’ space… without first discussing it with his partner.

When Karen arrived at the hospital, Bridget in tow, she announced that, once the patient was sprung, she’d be throwing her the quinceanera that she’d never had. Wasn’t it a little, er, late (in life) for that? Nah, Karen replied. “In her culture, they wait until after menopause to mark the moment a woman becomes a man.” Unfortunately, Rosario wouldn’t make it to her party — the doctor soon informed Karen that unexpected complications had led to her pal’s sudden death.

From there, we cut right to Rosario’s funeral. Sweetly, Karen had had the church decorated as if a quinceanera was about to take place, not a memorial. But that was about the only sweet thing Karen was capable of in her darkest hour. When Grace asked if she was OK, she barked that of course, she was. “I’ve been on my own since I was nine months old. I breastfed myself!” She’d been like this for two days, Jack reported, adding that, having been beaten up by his playmate so much, “I’m more confused than Britney on stage in Vegas.” Then it dawned on him: “Is this Karen sad?”

Momentarily, the queen of mean was snapped out of her grief rage by the arrival of stepdaughter Lorraine (Speechless’ Minnie Driver, reprising her role), who greeted Will and Grace with “Hello, Bill. Hello, Patty.” Though Karen was in no mood for a reunion with her nemesis — “Turn around and Brexit!” she ordered — the Brit tried to make nice. Well, sorta. “I know no one could ever replace Maria… ” she said. Eventually, the foes shared a hug… which allowed Lorraine to make off with Karen’s earrings. 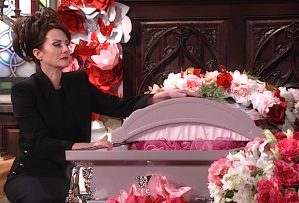 Later, as the service got underway, Karen wasn’t in the church, she was next door at a bar, slurping down a martini and being cheered up by a classic Smitty sob story, this one about how an armed robbery had left him almost entirely deaf. When Grace went over to talk to Karen, she made it all about herself and her mother’s passing. When Jack took a turn, he came back saying, “I’ve never been so humiliated without specifically asking for it.” That just left Will, who unexpectedly got through to Karen, interrupting her mid-rant with a from-behind embrace. “Of all the times to come on to me!” she cracked. But, tellingly, she held his arms around her when he began to pull away.

After the service had concluded and the mourners, departed, Karen at last returned to the church to say her goodbye. Megan Mullally was particularly excellent in this scene, as her alter ego told Rosario’s lifeless body that everybody kept asking what she needed. “I need for you to not be gone,” she admitted, putting a lump in the throat of the entire audience at once. After giving Rosario her mother’s ring (“Lord knows you’ve been eying it for years!”) and pulling cleaning fluid out of the casket to wipe away a smudge, Karen sat with her fallen friend for a while. “Te amo, Mami,” she concluded. (At least I think that’s what she said — I was slightly blubbering by then.)

Watching the scene unfold from the back of the church, Jack had an epiphany. “That’s Karen sad,” he told Will and Grace. So, what did you think of the way the show handled Shelley Morrison’s retirement/Rosario’s passing? Grade the episode in the poll below, then wipe away your tears and hit the comments.