The following contains spoilers for the Season 5 premiere of Mom.

In Thursday’s Season 5 premiere of Mom, Adam proposes to Bonnie not once, but twice.

At the beginning of “Twinkle Lights and Grandma Shoes,” Adam returns from a six-week movie shoot and tells Christy that he’s about to pop the question. Rather than ask Bonnie at the burger shack where they had their first official date, Christy encourages Adam to take her mother to a fancy restaurant. There he has the waiter hide the engagement ring in a dessert soufflé, which ultimately catches fire, nearly wrecking the proposal. After initially saying yes, Bonnie whips herself into a frenzy worrying about the possibility of things not working out, removes the engagement ring and makes a beeline for the nearest exit. 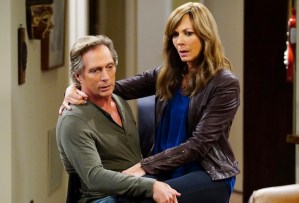 The next day, Bonnie heads over to Adam’s apartment to apologize. She tells him the proposal caught her off-guard, and she wants him to ask again. When he does, her answer is… “No!”

Later, Bonnie meets Marjorie, Jill and Wendy for lunch and fills them in on the second failed proposal. “I told my mouth to say ‘yes,’ but ‘no’ just came flying out,” she explains. At this point, she realizes the only way forward is to take matters into her own hands. After wandering back to Adam’s for apology sex, she surprises her boyfriend by proposing to him this time around. He accepts, then mutters something about being “together forever,” which triggers her anxiety anew.

Bonnie returns home to Christy and tells her that she’s afraid of getting married. Christy suggests that her mother “approach marriage like you do staying sober: one day at a time.” For now, she says, Bonnie can stretch out the engagement for years without ever actually setting a date. Bonnie ultimately has a month and day in mind (June 19), but leaves the year TBD.

* Christy passes her LSAT with an “average score,” paving the way for her to fulfill her law school dreams. 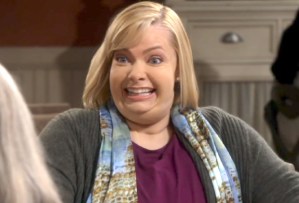 * Anxious about the possibility of losing foster-daughter Emily, Jill has resorted to stress-eating, and, as a result has packed on a few pounds. (For those who don’t know, this storyline was written to accommodate Jaime Pressly’s real-life pregnancy; she gave birth to twin boys in October.)

* With Christy’s help, Emily’s biological mother Natasha gets a job busing tables at the diner.

* Also of note: The opening title sequence has gotten an update. Now included are photos of Marjorie, Jill and Wendy. Gone is the family portrait featuring Violet and Roscoe, who have only made a handful of appearances since Season 2.

What did you think of the Season 5 premiere of Mom? Grade the episode via the following poll, then flesh out your thoughts in the comments.