The first rule of Fight Club: You do not talk about Fight Club.

The first rule of watching How to Get Away With Murder: You do not assume that any characters are emotionally stable, clear-headed and/or leading healthy lifestyles.

Whether it’s a central character like Laurel Castillo, or a tertiary character like Sam Keating’s little-seen sister Hannah, the ABC drama has reminded its viewers time and again that everyone on this show is working through some serious emotional baggage. So, the events of Thursday’s episode — in which we learned that Annalise’s stoic, even-handed therapist has some massive personal demons of his own — should have come as no surprise to any seasoned Murder viewer.

When the episode begins, Isaac is conducting his latest therapy session with Annalise, in which she’s venting about the reasons she fired Bonnie. (Isaac, of course, now knows that Bonnie is also one of his patients, which coats his entire career in a fun shade of gray.)

Annalise’s therapy sesh is interwoven with scenes of Isaac in therapy; he’s talking to a woman named Jacqueline about his current ethical dilemma. Not only are two of his patients emotionally invested in one another — one of whom first came to his office with a false identity — but Annalise’s mere presence in Isaac’s life is a trigger for him. We come to learn that Isaac lost a daughter at some point in the not-too-distant past. When Bonnie revealed last week that Annalise had also experienced that kind of loss, Isaac realized he could no longer give Annalise unbiased, impartial treatment. He doesn’t want to pawn her off on another therapist, for fear that she’ll fall off the wagon, or worse — but the more he treats Annalise and discusses her grief, the more tenuous his sobriety and sanity will be. (It’s also strongly insinuated that Isaac was suicidal after his daughter’s death; he and Annalise have that in common, too.)

Isaac consults Jacqueline multiple times during Thursday’s episode, each time looking a little more worn down — and Jacqueline notices. Even if Isaac can’t see it or admit it, he’s falling apart, and Jacqueline tries to make him realize that he’s on the verge of a breakdown, or perhaps a return to his heroin habit. Her pleas fall on deaf ears, of course, but it’s evident that Isaac can’t handle the stories of grief and loss that he’s hearing from Annalise anymore. A few hours after watching Annalise cry over her dead son, and the suicide attempt that followed his stillbirth, Isaac retires to his office and watches a video of his daughter’s high school graduation day. She’s in her cap and gown, acting goofy with Isaac as they try posing for pictures — and although we don’t know how or when the girl passed away, the video footage leaves Isaac sobbing at his desk.

That night, Jacqueline arrives at Annalise’s door, unannounced. “Can I help you?” Annalise asks, to which Jacqueline replies, “I hope so. I’m Jacqueline Roa — Isaac’s ex-wife.” (Reminder: If you thought Jacqueline was just an objective, third-party side character with no personal stake in the storyline, you broke the first rule of watching this show.)

In the episode’s closing minutes, we return once more to that unsettling flash-forward, which is now just days away from taking place in real time. Isaac, as we’ve seen in previous installments, calls Annalise to ask where she is, and this time, we learn her whereabouts: the shower, where she’s slumped against the wall, letting water pour over her while blood flows down the drain. 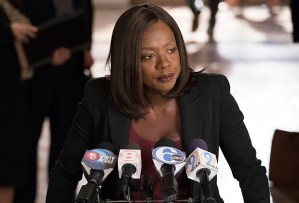 * When Annalise isn’t pulling skeletons out of her closet in therapy, she’s busy handling her class-action lawsuit. This week, her focus is on former cellmate Claudia, who used to sell marijuana out of her mother’s house before getting arrested. Now, thanks to a fun concept called civil asset forfeiture, the house is in danger of being seized by the state, even though Claudia’s mother never broke the law while owning the place. There’s a whole lot of legal jargon that gets thrown around — I now know more about injunctions than I ever planned to — but by episode’s end, Annalise manages to wrench the house out of the state’s possession.

Even better? Although most of Virginia Cross’ former clients have since dropped their names from Annalise’s lawsuit, Claudia maintains that she still wants to be a part of it, if only for her sons. Even better better? Connor helps Annalise win Claudia’s case, and in doing so, reveals that he miiiiight want to pursue being a lawyer, after all.

Bonnie, on the other hand, is forced to put this week in the “L” column. Even though D.A. Denver initially praises her for sabotaging Annalise’s class-action lawsuit, he ends up reassigning her to a different case not involving her former boss, since she’s clearly too emotional to spearhead any projects related to Annalise. The reassignment doesn’t seem to rattle her at first, but when Asher visits Bonnie’s house later that night, she sobs into his chest and confesses that she “messed everything up.”

* Here’s what How to Get Away With Murder can offer as a palate cleanser to all of that sadness: After scoring a 170 on his LSAT — which is terrific, but not quite the 179 that Elle Woods pulled off — Frank pays Laurel a visit to give her the good news. He assures her that, even if the baby isn’t his, he’s going to work hard, become a lawyer and give Laurel’s son the stability and care he needs. In other words, he’ll love the crap out of that baby, because he loves the crap out of Laurel. (Frank and Laurel are kind of the worst, but the kiss he gives her before leaving the apartment is swoon-worthy all the same.)

* Laurel’s dad makes an unexpected visit to the Caplan & Gold offices, where he calls an emergency Antares meeting. Michaela and Oliver are massively paranoid that Jorge somehow found out about last week’s security breach on Tegan’s computer — but the real reason for his visit is that Antares is about to go public. For Jorge and Tegan and all of the VIPs at Caplan & Gold, this is great news; they’re about to be even richer and more successful. But the way Laurel sees it, this deal only confirms that her father had Wes killed, considering that Antares would never have gone public if Wes were alive and able to implicate all of his classmates in the terrible things that have gone down in the last three years.

While Laurel, Michaela and Oliver discuss how to hack into the Antares files — which will now require swiping Tegan’s security badge — Asher watches the entire conversation unfold via a camera he implanted into a teddy bear he gave to Laurel. (Creepy, but necessary.) Realizing that Michaela is continuing to lie to him about how she’s spending her time, he decides to pack up his things and leave his girlfriend’s apartment — even after she blurts out that Laurel’s dad is responsible for Wes’ death. “Promise you won’t tell anyone!” she calls after him… but given that he ends up in a jail cell two weeks from now, it’s safe to say that Asher does not handle this new information well.

OK, your turn! Your thoughts on this week’s Murder installment? Drop ’em all in a comment below.