Danger hit close to home during Chicago Fire‘s fall finale on Thursday when Dawson discovered that the stabbing victim she and Brett had been called to save was none other than her father Ramon.

Elsewhere, a drunken Stella kissed Severide — “Not like this,” he told her — and then claimed not to remember the smooch the following morning. What brought on the overindulgence in booze? Stella was unexpectedly transferred out of the firehouse to CFD’s PR department in a secret plot orchestrated by Hope. After Casey and Herrmann went digging for answers about the move, Brett’s hometown pal was exposed for the schemer that she is.

In happier news: While eyeing a down-on-its-luck bar as a potential Molly’s North location, Otis discovered his dream girl in the owner’s daughter Lily.

Below, showrunner Derek Haas previews Ramon’s fate and how it will bring the whole Dawson family together. Plus: Will Hope be back? (You may not like the answer.) Is Stella pining for Severide? (Fat chance!) And has Otis finally found love? (Fingers crossed!)

TVLINE | Where do you put the survival odds for Ramon at this moment?
A vague answer is that Dawson is going to be freaked, and Brett is going to try to step up, and they’re going to do everything that they can to save him. [The next episode is] going to pick up right where [the fall finale] left off.

TVLINE | Both Dawson and Casey left things on a sour note with Ramon before this incident went down. What’s their emotional headspace as you’re heading into the next episode?
We have a batch of episodes coming where it’s less about Ramon, and more about a young teenage girl that Dawson feels for, and Casey’s worried that she’s putting her heart into a precarious position.

TVLINE | Considering this is Dawson and Antonio’s father, can we expect Antonio to play a bigger part on Fire?
Yes. He’s going to be, for sure, in the next two [episodes], and then [there’s] a little bit of a break where you think, “Oh, that was short,” but it’s not going to be as short as the audience thinks. I know our audience well enough to know after the events of Episode 8, they’re going to be like, “Why would they give us this if they’re not giving us more?!” And then there will be more. 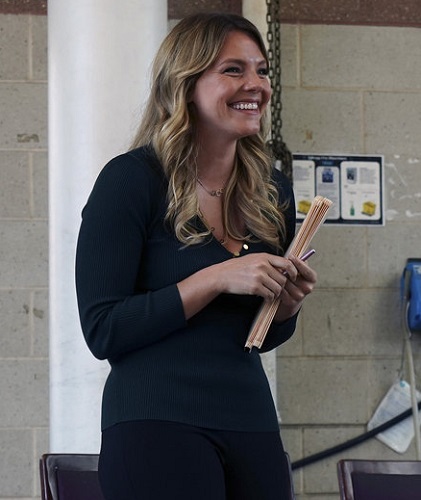 TVLINE | Have we seen the last of Hope?
There’s a 50/50 chance she’ll be back in the second half [of the season]. She’s such a great foil and a really great actress.

TVLINE | Her character seems very unstable and unpredictable. Is she going to exact revenge for what’s happened to her?
We’ve shied away this year from the true crazy characters. Hope saw early on what Brett had and decided, “I want that. But I’m not going to put the four years into training to be a paramedic.” So it’s, “How can I manipulate…?” We kind of get the sense she did this back in Fowlerton. So she brought the act here, and fortunately, Firehouse 51 didn’t get completely snowed. She picked a fight with the wrong people.

TVLINE | She also seemed to want Stella’s life to some degree.
Well, Stella was onto her first. When you see the threats, you’re like, “I’m going to eliminate Stella. I’m going to eliminate Connie,” which she didn’t, really, but she was setting the groundwork for that. Like, “Oh, here’s the yellow files you were missing,” which she probably took off his desk. It was, “Eliminate threats, ingratiate myself with certain people and then we’ll see where it goes from there.” 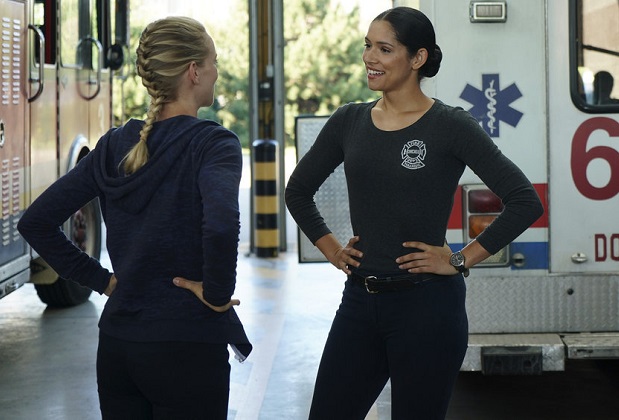 TVLINE | It’s obvious that Sylvie feels bad about bringing Hope into the firehouse. How will this incident affect her position in the firehouse and her relationships?
It’s really the relationship with Kidd and her, and that will get resolved in the next episode. I don’t necessarily like all internal conflict that keeps going for a long time. Look, good friends have fights, and then they work stuff out.

TVLINE | Does it become this elephant in the room between the two of them?
Yes. That’s going to be playing out over the next several episodes.

TVLINE | In the meantime, is Severide still a playboy?
I think she’s trying to decide if she’s a playboy or not. She’s not going to pine for him. She’s going to show that she’s not hung up on him, and she’s willing to look at other people in Chicago. There are other eligible men in Chicago.

Fire fans, what did you think of the fall finale? Grade it via the poll below, then hit the comments to back up your pick!