Season 5 of ABC’s Agents of S.H.I.E.L.D. is finally starting to come into focus, four weeks ahead of its delayed premiere (Friday, Dec. 1 at 9/8c).

Marvel.com on Thursday released the first photos of four new characters that will figure into the new, outer space-set storyline. (If you can think back, Season 4 ended with Coulson & Co.’s Framework-foiling victory celebration being cut short by stone-cold agents of some sort. Afterward, we saw Coulson aboard some sort of space station, where he apparently has been toiling for some time.)

New to the Season 5 scene are as follows:

Jeff Ward (Channel Zero, photo above) is playing Deke, “the ultimate survivor and roguish scavenger, the guy who can get people what they need, but at a price of his asking.” He is is described as “both a real asset … and a hard man to trust.” 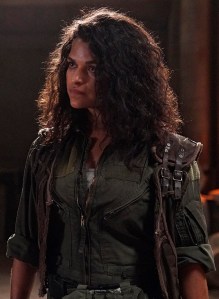 Eve Harlow (The 100, right) is playing Tess, a resourceful young woman striving to be self-sufficient in very desperate circumstances — and thus far “has hung on to her hopes for a better future for herself and those closest to her.”

Pruitt Taylor Vince (The Mentalist) is playing Grill, a “gruff taskmaster” who lords over those under his command with an unforgiving temperament. He is not easily fooled, nor crossed.

Coy Stewart (Nickelodeon’s Bella and the Bulldogs) is playing Flint, a young man who, when he crosses paths with the S.H.I.E.L.D. agents, may get the chance to prove that he’s capable of big things.

Photos of all four new characters can be found at Marvel.com.