Elliot teams up with his sister Darlene to fight the Dark Army this week on Mr. Robot… but will they both be around to stop Stage 2? 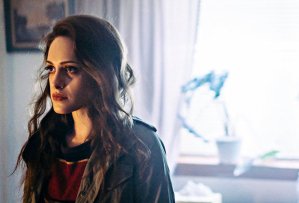 We pick up with Elliot breaking into Darlene’s safe house; when she arrives home (after a heads-up from Dom), he angrily confronts her about hacking him. She tells him to back off, warning him not to go all Mr. Robot and hurt her again. She asks if Robot is working with the Dark Army again, and he admits he thinks Stage 2 is still on, despite his best efforts. (As Elliot, anyway.) So they strike a deal: Darlene will move into the apartment next door to his and watch him at night to make sure he, as Mr. Robot, isn’t working with Tyrell and the Dark Army. She admits the plan is weird, “but I guess we passed ‘weird’ a long f–king time ago.” (Sure did!)

Meanwhile, Stage 2 is indeed still full steam ahead, with Irving informing Angela that it’s going down in just ten days. She wants assurances that no one will be inside the E Corp building when the Dark Army blows it up — but can you really believe anything that car salesman says, anyway? Plus, the feds haul in a Mr. Nouri, who made the last Mr. Robot video. Dom and her new colleague Norm hammer the guy with questions, but he remains stoically silent, only saying that “fsociety” is his leader. His eyes do flicker with recognition when Dom says the name “Whiterose,” though, and she thinks he was a little too easy to track down.

Elliot can’t shake the feeling that Stage 2 still “excites me” a lot more than his grunt work at E Corp, and late one night, Darlene spies him leaving his apartment in Mr. Robot mode. She follows him and sees him talking with… Angela! (This is Darlene’s first indication that she’s involved, right?) Mr. Robot and Angela lose Darlene and head to their underground lair to meet Tyrell, who smashes his keyboard in frustration after learning Elliot has altered the shipping data to keep E Corp’s paper records out of the targeted building. He lashes out at Mr. Robot, calling him a “liability,” and Robot responds by putting Tyrell in a chokehold — but then he glitches out, and suddenly, he’s Elliot, confused about where he is. Angela assures him everything’s OK… as she injects him with a syringe, knocking him out. 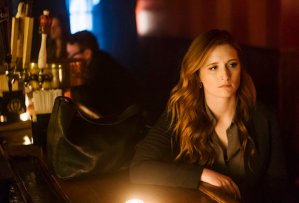 Darlene meets Dom at a bar, but she doesn’t rat out Angela; instead, she pries into Dom’s personal life, concluding from Dom’s careful pronoun use that she’s a lesbian. (She doesn’t judge, though: “Whatever diddles your Skittle.”) Dom pushes for information on Tyrell, worried that a big attack is imminent. Darlene agrees to help, but insists she has to do it alone, without a wire. “It’s game over for me” once Tyrell is caught, she tells Dom: “I’m gonna lose my brother.”

Tyrell takes his complaints about Elliot to Irving, who insists Stage 2 can’t be delayed. He gives Tyrell a pep talk, assuring him that he can get E Corp’s paper records to the building on time. But when they’re done, Tyrell wants to flee to the Ukraine… with his wife and child. (Oof. He doesn’t know. And Irving doesn’t tell him!) Angela asks Phillip Price to fire Elliot and ban him from all E Corp branches, promising to “return the favor,” and he agrees. She checks in with Irving and Mr. Robot; Stage 2 is still a go. And Darlene packs up to get the hell out of Dodge, leaving an old family photo in Elliot’s apartment before hitting the road.

* This week’s least believable plot point: that a perfectly good apartment in Manhattan — the one next to Elliot — would remain vacant for several months. The landlord never rented it out? Really??? You could charge three grand a month for that place, easy.

* Guys, I don’t have a great feeling about Darlene surviving much longer. Not only did she make that “vengeance pact” with Elliot, with him vowing to avenge her death, but she also was checking out airfares to Budapest. Never plan for the future on a TV drama, Darlene! That’s a sure path to an untimely death.

* Dom’s colleague Norm seems to only be on this show to be completely wrong, whether falling for Elliot’s obvious phishing scam or insisting that Whiterose is only a myth. But we already know Santiago is working with the Dark Army… so is Norm in on it, too, and Santiago partnered him up with Dom to slow her down?

* What happened to Tyrell’s professed “love” for Elliot/Mr. Robot? Last week, he worshipped the ground Elliot walked on; this week, he was furious with him and pushed him away. Jeez, Tyrell, you are fickle.

* So that weird exchange between Angela and Irving at Red Wheelbarrow BBQ, where she asked him, “Did Whiterose ever show you…?” (He said “Yes,” and she asked, “And you believe in it?”) Showed them what? Does Whiterose have some sort of mystical secret that got both Angela and Irving to sign on for Stage 2? Kinda like the glowing briefcase in Pulp Fiction?