Brace yourselves, Chicago Fire fans, because this Thursday’s fall finale (NBC, 10/9c) is going out with “a killer cliffhanger,” star Kara Killmer tells TVLine — before offering up an apologetic “I’m so sorry.”

Fire is no stranger to surprise endings, but this twist will be somewhat of a departure for the show. “We were told earlier in the summer that we were only going to have six episodes before we’re off for football,” showrunner Derek Haas explains. “So we thought, ‘OK, how can we end six episodes on a cliffhanger that’s different than anything we’ve ever done?’ So there’s going to be a shocking last 30 seconds.”

Then there’s this ominous teaser from cast member Eamonn Walker: “Someone else is leaving the building.”

But that’s not all the hour has in store to keep viewers enticed until the show’s return in early 2018. Read on for scoop about Severide and Stella’s “awkward” kiss fallout, Dawson and Casey’s latest obstacle and more.

THE TROUBLE WITH HOPE | Having only a half-dozen episodes also allowed Haas and the writing team to craft an overall arc with Brett’s pal Hope. The conflicts her presence has created in the firehouse “are going to come to a head by the end of this episode,” Haas says. Adds Killmer: “There’s so many things going on with Hope. You start to see a real departure from hometown goodness, at least for Brett.”

FATHER DOESN’T KNOW BEST | Leading man Jesse Spencer thinks Dawson’s pops Ramon is “a sweet, sweet character,” but Casey probably wouldn’t agree with that sentiment. Ramon is “grating” on Dawson and Casey’s marriage, and now the couple is “caught in a position where they really want to help him, but Casey’s already had him kicked out,” Spencer describes. “And then he comes back and is trying to use Casey’s contacts as an alderman to try to get a foot in the door, so to speak.” On top of that, the firefighter is “already dealing with this captain stuff,” so “there’s a lot of tension” between the trio. 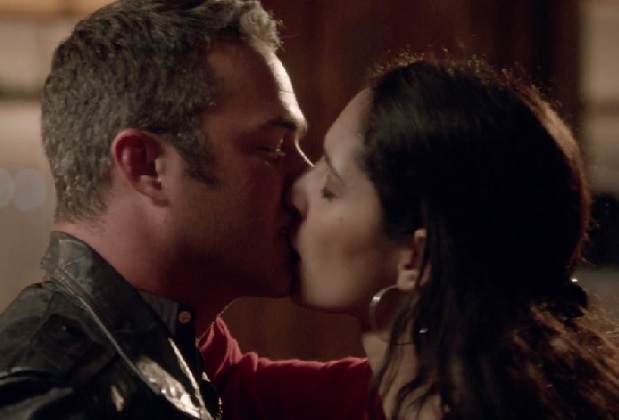 KISSING FRIENDS | Your eyes did not deceive you: Roomies Severide and Stella are smooching in the promo for the fall finale. “But it’s not what you think it is,” warns Haas, who describes the lip-lock aftermath as “awkward.” “It’s complicated by the fact that they’re living together, which was supposed to be a short-term thing, but it doesn’t seem like Stella’s been looking for another place. It’s not going to be the romantic moment — yet, at least — and it’s going to make things difficult for both of them going forward.”

FIREFIGHTER ON THE MOVE | When not dealing with her feelings for Severide, Stella will find herself facing another crisis after she’s abruptly transferred to CFD’s PR department. “She’s not going to like it,” Haas says. “What you find out is that the Office of Public Relations has been looking for a strong female firefighter for a while. And part of it is: Did this get requested by public relations or Chief Mullins? He saw her operate. Did he put her name in the hat? Casey’s like, ‘Is this a test? Is he testing me? He didn’t ask me ahead of time.'”

Press PLAY below to watch an exclusive clip of Stella getting the bad news that she’s being transferred — and not down the road, but now!