The CW’s The Flash introduced its take on the Elongated Man this Tuesday, and their Ralph Dibny was more inclined to bend rules, as a sketchy P.I., than some of his comic book iterations.

Tackling the super-elastic hero (played by Hartley Sawyer) has been on the TV series’ drawing board for some time, but producers wanted to give the fantastic mister his due. “Every once in a while, somebody would bring it up as sort of an episodic thing, and we thought that he was sort of too big a deal,” co-showrunner Andrew Kreisberg recalls. But going for it in Season 4, to freshen things up, seemed the right time.

“We really wanted to bring somebody in and have it feel like something new and something different and something you hadn’t seen a lot of on television. And not just his skill set, but also that character,” says Kreisberg. “Shows that have seven years or eight years or nine years, they always have that new character come in around Season 3 or 4 or 5 that helps take you through their way. Obviously they’re not similar characters, but I’m thinking about like Faith on Buffy. That was sort of our hope for Ralph.”

As revealed in the episode “Elongated Journey Into Night,” Ralph (in this post-Flashpoint existence) is no superfriend of CSI Barry Allen’s but a rule-bending former cop who lost his job after being busted for planting evidence. As such, things were a bit prickly when he and Barry reunited. “You don’t want to add something that you already have” is Kreisberg’s reason behind the character tweak. “Ralph in the comics is very squeaky clean… and a good guy. The one thing we didn’t have on this show — because everybody is so likable — is a jerk. Harry has become a jerk in a different way, but we didn’t have somebody who was just sort of a louse and crude and liked to drink, somebody who would also come in and sort of point out how silly it is that everyone’s in a superhero show…. We thought it would be interesting [to ask], ‘What if you had a little bit of a murkier backstory, and by the time we got to season whatever, he’s the Ralph Dibny that everybody knows and loves from the comics?'”

Adds co-showrunner Todd Helbing: “When people say [this season]’s tonally similar to Season 1, a lot of that comes from – as you’ll see – Ralph discovering his powers and how to use them. And it’s fun to see somebody, especially a guy like him, do that. Season 1 was all Barry discovering his powers, and now you can see Ralph do it and sort of the crazy ways that we’re going to show that.” 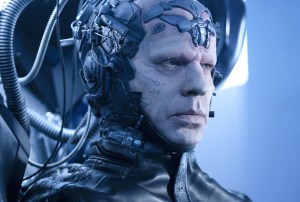 Ralph’s intro also brought with it a bit more intel on the mysterious someone who set this new metahuman incursion in motion. At episode’s end, he disclosed that the person who had him poking his nose into the mayor’s infidelity, and thus landed him on the city bus that got whammied by dark matter, is named DeVoe — thus giving Barry & Co. their first big clue to who has been manipulating their lives.

Explaining the pacing of revealing The Thinker — who thus far has waxed brilliant and egotistically from a secret lair, and has yet to come in contact with Team Flash directly —  Kreisberg says, “It’s a constant problem for these kinds of shows about, ‘How much you reveal and how much do you hide the bad guy?’ We might have done a disservice to ourselves last season because we knew who Savitar was at the beginning and we waited too long to reveal it to the audience, and then we lost what I think could have been some valuable real estate exploring that. So this season we just wanted to be ‘cards up’ and reveal, ‘Here’s the bad guy at the end of Episode 1 and they’re going to get on him fast.'”

And in comparison to seasons past, the sticky wicket here will not be the annual, “Who’s behind the mask?” but “Are we too late to stop him?”

As Kreisberg shares, “The network and the studio were sort of asking, ‘Why does The Thinker allow them to know [his name] at this point?’ And we were like, ‘He doesn’t care.’ He’s playing chess — I know that’s sort of a cliche to say, but in this case it’s really true — and as far as he’s concerned, he’s already checkmated Team Flash. He doesn’t really give a s–t what they know and when, because he’s going to say in an upcoming episode, ‘You’ve already lost.’ It’s really about trying to figure out how to get ahead of somebody who is playing so far ahead of you.” (With reporting by Jean Bentley)