Do you think Chad Lowe ever imagined himself donning a flowy white shirt, standing before a crowded room and declaring, “In the name of Supergirl, our savior, we give thanks”? Because it happened.

TV’s Byron Montgomery guest-starred in Monday’s Supergirl as Thomas Coville, the leader of a cult devoted to the Girl of Steel. And while his intentions may have been pure, his methods — convincing people to throw themselves in harm’s way in order to be “saved” by Supergirl — were a little wonky.

Kara figured that confronting Thomas would be the quickest way to shut him down, but — plot twist! — he saw right through those extremely thin-framed glasses and called her out for being Supergirl. He promised to keep her identity a secret, but if you’ve ever seen the documentary Pretty Little Liars, you already knew he wasn’t to be trusted.

Further proof of the reverend’s untrustworthiness: He rigged a Kryptonian probe to blow up a stadium of innocent sports fans! Supergirl was able to keep things from going kaboom, but only with a major assist from Alex. (Seriously, Kara owes her the biggest Christmas present ever.)

Surprisingly, Thomas did end up keeping his promise, offering Kara these final words of comfort from jail: “Even gods can lose their way. You’re at a crossroads, and I finally understand Rao’s will for me: to help you on your journey … back to balance, back to peace.”

Speaking of journeys, Kara inadvertently activated Reign’s underwater ship when she sent the explosive probe underwater, expediting Sam’s transition into the Big Bad of Season 3. (And kudos to Team Supergirl for that creepy final scene in which a tattoo’d Sam received an otherworldly visit from one of her own; I think we were all as freaked out as Ruby.) 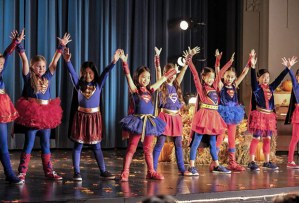 * That group dance number with all the little girls dressed up like Supergirl was pretty cute. –>

* Chyler Leigh turned in a pretty compelling performance this week, but after everything Alex and Maggie have been through, can you believe that having kids is what’s coming between them? I blame Ruby for this. And Willy Wonka. (That song!)

* Did Supergirl‘s preachiest season yet really need a literal preacher to hammer its latest lesson home to us? (Also, what was that lesson, exactly?)

Your thoughts on this week’s Supergirl? Drop ’em in a comment below.