“Mom” is kinda sort of but not at all really the word when Tricia Helfer returns to Lucifer as the real Charlotte Richards, no longer but a vessel for the Goddess of All Creation. Rather, after the events of the May finale, (a confused) Charlotte has recently resumed her existence as a high-powered attorney — and tonight (Fox, 8/7c) she happens to cross paths with Chloe, Lucifer… and poor Dan.

Helfer gave us a peek at what to expect from her new-ish character.

TVLINE | On a scale of 1 to 10, how patiently have you been waiting to get back into the mix of things and be back on-screen?
Oh, I’m definitely very excited for this episode. I’m nervous because I’m playing a brand-new character, basically, but in a way the harder part was actually when we started filming. The show had moved [production] to L.A., so it’s a whole new crew, a whole scenario and then you come into [the season] late. You’re like the kid late for school.

TVLINE | What questions if any did you have when you saw that season finale script?
Well, I had been prepped prior to reading the last script that it wasn’t going to be Mom coming back, it was going to be Charlotte Richards. Originally, I was a one-season arc, right, but not “the baddie” because Mom wasn’t bad…

TVLINE | She was “a wrench in the works.”
That’s a good way to put it. So minus those questions when I first got picked up for another season, which I knew early on [in Season 2], I wanted to make sure that the writers had a clear vision clear for this season, so we sat down and talked about Charlotte. Coming from Battlestar [Galactica] and having played multiple characters, I looked at it as a challenge. Here you’ve got a character that looks the same but ultimately you’re making them a different person and hopefully being convincing to the audience that they’re looking at a different person. 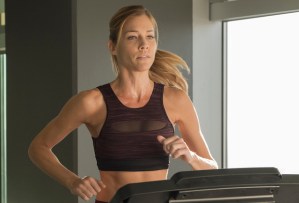 TVLINE | You want to make her entertaining in her own right.
Exactly, because Mom had a certain flair. As the Goddess of All Creation, you could be a little grander with her and her disdain for humans. Mom wasn’t setting out to be funny, but with some of her fish-out-of-water antics, there was comedy around her. And with Lucifer, obviously there are a lot of dramatic elements, but there is a lot of comedy in the show. Charlotte doesn’t have a lot of comedy about her because she’s coming back from, basically, a four-month blackout where she doesn’t know anything that happened, but she keeps finding out about people that she’s hurt and things that she’s supposedly done and her life is in disarray.

TVLINE | Are we going to get any flashbacks to her first acclamation, or will we just hear her talk about it?
We don’t see flashbacks just yet. Charlotte was a high-end defense attorney, a shark, basically, and where we pick up she is now going back to work for the first time.

TVLINE | She’s had some time to sort things out best she can.
Yeah, and she tries to cover it up [her blackout], because she thinks she could be having a nervous breakdown. She’s having flashes of this terrible kind of nightmare that she thinks is reliving. For this powerful lawyer, that is almost worse than anything because it’s like you’re not in control of your own mind. And then Dan starts calling her, and she has no idea who this person is, so she starts trying to piece things together. That’s when she grasps onto, “Oh, somebody says I used to know Lucifer well,” and through him she finds some things out. But Charlotte is definitely dealing with identity — she remembers who she was, and now she’s trying to be a better person. 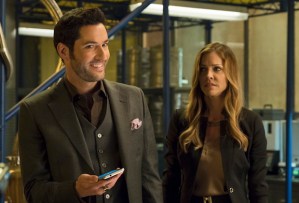 TVLINE | As we see in the new promo, since Charlotte is not Lucifer’s mother anymore, she’s prone to pounce on him like any other red-blooded female.
Yes, absolutely, and I did talk to the showrunners about that. Lucifer has this effect on women, but [with Charlotte] it’s not like where we’ve seen women throw themselves at him because he’s irresistible. She’s trying to grasp onto something and she assumes that they had a relationship because she’s been told they were very close.

TVLINE | Oh, OK. She’s trying to spark something, maybe a memory.
Exactly, here’s there’s this handsome man, so if we were close, of course we were together, right? But it’s very hard for Lucifer to see this woman as somebody that’s not his mom. [Laughs]

TVLINE | Does this Charlotte have the same “If you’ve got it, flaunt it” fashion sense as Mom?
She does. A little less grand, I would say. A little bit more business. Ella points out something about my fancy shoes and things like that. Charlotte has expensive taste, that’s for sure. 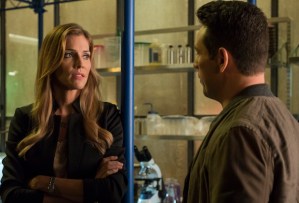 TVLINE | When you were talking before about Dan and him trying to process all this, I was going to say, “poor Dan.” What is Charlotte’s initial dynamic with poor Dan?
Yeah, poor Dan. Oh my God, she doesn’t know him at all, and she really does just kind of push him aside. And that’s not to say that that’s going to stay for the season, mind you. I think Dan’s “good guy”-ness, if that’s a word, will ultimately possibly win her over. But definitely, in the beginning, she is just like, “Get away from me, I don’t know who you are and leave me alone.”

TVLINE | Any other tease about what’s to come for the new Charlotte?
Ella Lopez, Aimee Garcia’s character, has an ability to kind of sense into people. Last season, she tapped into Mom and was like, “There’s a lightness about you,” and now she’s reading Charlotte and she goes, “That light about you is gone.” So Charlotte thinks this woman knows something about me, and so she zooms in on Ella. I had a really great episode working with Aimee, where we see Ella the first time really backpedaling and trying to get away from this person. She’s usually so wonderful and lovey and huggy and whatever, and she’s just like,”Ahhhhh! Get me away from her, she’s scaring me!” Charlotte’s then on her like a shark. She wants information from her, so that’s a fun episode that I got to do.