Well, that was a fun little brain-bender of a Star Trek: Discovery episode, wasn’t it? (Harry Mudd plus a repeating time loop is a pretty reliable formula for quality, after all.)

Burnham is feeling more at home on the Discovery, and even experiencing some unfamiliar feelings towards new crew addition Lt. Ash Tyler. (“I find him… intriguing,” she narrates.) She still feels awkward at a crew party, but her roomie Tilly is letting loose, playing beer pong and confessing, “I’m kind of going through a musician phase right now.” (You go, Tilly!) She encourages Burnham to chat up Tyler, but they’re interrupted by a call to the bridge: The ship has spotted a gormagander — a kind of winged space whale — that looks to be in distress, and they beam it aboard for Burnham to take a closer look.

Once the creature is onboard, though, it opens its mouth, and a masked man jumps out, shooting crew members while Burnham takes cover. The shooter takes off his mask to reveal: It’s Harry Mudd! He tells Lorca he’s plotting to sell the Discovery to the Klingons as revenge for Lorca ditching him on that prison ship and keeping him from his beloved Stella: “Also, I’m going to kill you as many times as possible.” He’s not taking the ship right now, he explains, but just collecting data to do it later, “or, rather, earlier.” Then Mudd triggers an explosion that blows up the entire ship… and we’re back at the party again. Huh? What in the name of James Tiberius Kirk is going on here? 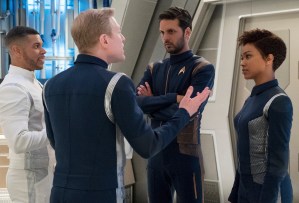 Well, Trek fans have probably caught on by now: The ship is caught in a temporal loop, with a certain period of time repeating itself over and over again, Groundhog Day-style. The party happens just like last time, but Stamets stops Burnham and Tyler on their way to the bridge, ranting about the gormagander… which Burnham and Tyler then hear about on the bridge. They wonder how Stamets could’ve known, and later discover Mudd in engineering, trying to figure out how the spore drive works. Stamets manages to kill Mudd, but the ship is still rigged to explode, and before it does, Stamets tells them they’ve already been through this multiple times — and it always ends badly for them.

The loop starts over, and Stamets tracks down Burnham at the party, explaining the temporal loop and theorizing that his newly implanted tardigrade DNA is what’s allowing him to retain his memory through all the loops. He also asks Burnham to tell him a secret, so he can repeat it back to her on the next loop so she knows he’s telling the truth. Sure enough, on the next loop, he yells at her: “You’ve never been in love!” (Ouch. Harsh, but effective.) He asks Burnham to talk to Tyler about Mudd, since they spent time together in that Klingon prison cell, so she takes Tyler aside for a slow dance at the party and tells him all about the temporal loop. So he figures, since they’re looping anyway… he might as well kiss her. (Quick, what’s their shipper name? “Burnler”?)

Tyler remembers that Mudd once bragged about robbing a bank, and they realize he must have some kind of time crystal that allows him to control time and memorize security patterns. Meanwhile, Mudd is enjoying torturing his nemesis Captain Lorca — we see a montage of all the times he’s killed Lorca in various loops — but now he’s tired of messing around: He has a purple orb of weaponized dark matter that can kill people in the most excruciating way imaginable, and when Tyler lunges at him, Mudd uses the dark matter to kill him. When Mudd threatens to use it on every other crew member, Stamets caves, agreeing to show him how he connects to the spore drive. All hail Captain Mudd! 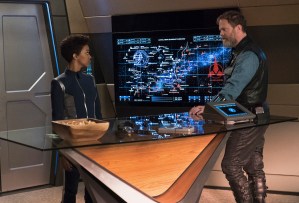 Burnham needs to find a way to have Mudd restart the loop, so she appeals to his greed: Don’t just give the Klingons the ship; give them Burnham, too, since she killed their leader T’Kuvma. Mudd sees dollar signs, but before he can act, Burnham swallows an orb of dark matter, killing herself and forcing Mudd to start the loop over. This time, Lorca offers to hand over the Discovery and Burnham to Mudd, if he’ll spare the lives of the crew. Mudd happily agrees, sending the ship’s coordinates to the Klingons and letting the time loop end and his crystal dissolve.

As Mudd crows, “I deserve this!” Stamets points out he wasn’t really pining for Stella; he’s actually been hiding from Stella and her father after seducing her and running off with the dowry. But Mudd didn’t send their coordinates to the Klingons; he sent them to Stella and her dad, after Tyler rewired the ship’s computer. Stella and her dad beam aboard, and Mudd scrambles to explain that he was just trying to pay off all his debts before marrying her. Somehow, she believes him, and her rich dad agrees to settle Mudd’s debts… but now he’s stuck with her. (A fate worse than death, it seems.) Crisis averted — and now that the loops have ended, Tyler tells Burnham, “I’m just sad we missed our first kiss.”

* Temporal loops are a classic Trek plot device, and this episode played out a lot like Next Generation‘s Season 5 episode “Cause and Effect” — one of my personal favorites — with Data filling the Stamets role of helping the crew extract themselves from the loop.

* Still thoroughly enjoying Rainn Wilson as Harry Mudd. Is he hamming it up a little? Yeah, probably. Do I mind? Not at all.

* Nice to see the Discovery crew getting crunk at that party, but are we really thinking that Wyclef Jean’s 1997 track “We Trying to Stay Alive” will still be a hot party jam two centuries from now? (Love the song; just asking.)

* Not sure who I like better: post-tardigrade, stoned-out-of-his-gourd flower child Stamets, or hard-partying wild child Tilly.

* Didn’t it seem like the loop with Burnham and Tyler’s slow dance and kiss lasted a lot longer than the other loops? We got a full Al Green song in before they were called to the bridge!