The action in the Season 2 finale of Stranger Things was, as you’d hope, explosive. And it was also pretty exciting watching Eleven close the gate that gave “Chapter Nine” its title. Because sure, it was important that the door to the Upside Down be shut (and, ideally, dead-bolted). But what really got my heart — and, I’d wager, yours — pounding were the twists of plot that changed so many of our protagonists’ relationships forever. Or at least until Season 3.

As the episode began, El revealed to Mike that she knew he’d called her every night since her disappearance. Hopper just wouldn’t let her answer, the chief admitted, adding that Mike shouldn’t hold that against El. “I don’t blame her, I blame you!” shouted the tween, so overcome that he actually punched Hopper before dissolving into tears. When Max introduced herself, El snubbed her hard. (Clearly, holding a grudge is among her superpowers.) Upon reuniting with Joyce, El assured Will’s mom that she could close the gate. The trick would be doing so, thereby killing the shadow monster, without also killing Will.

Joyce decided that, since the monster likes it cold, they’d have to drive it out of her son using heat. To keep Will from psychically conveying their whereabouts, she, Jonathan and Mike would take him someplace he didn’t know — Hopper’s shack. Nancy should go with them, suggested Steve, his credentials as not just a good guy but a great one by now etched in stone.

Before leaving for the shack, Mike would have gotten a kiss from El, had Hopper not interrupted. (Copblocked!) En route to Hawkins Lab, the tension between the chief and his ward at last broke. She confessed that she’d gone to see her mother, he admitted that he didn’t hate her “bitchin'” new look, and they both acknowledged that they’d broken their Don’t Be Stupid Rules. He even confided in her about Sara — and said that, if he was overprotective of El, it was because he feared losing her, too. 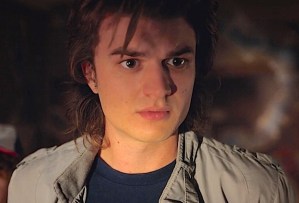 Back at the Byers house, Dustin suggested to a worried Mike that maybe they could clear a path to the gate for El by setting fire to the underground hub. Surely, if they did that, the shadow monster would send its Demodogs to investigate, leaving the gate unprotected. No way, said Steve, star of his own personal version of Adventures in Babysitting… just as — uh-oh — Billy arrived. Before you could say, “Not the face! Not the face!” Max’s stepbrother had spotted her in the window, roughed up Lucas and beaten the crap out of Steve. Finally, Max put an end to his rampage by plunging into his neck a leftover syringe full of anesthetic and using Steve’s bat to obtain a promise that, henceforth, Billy would leave her and her friends alone.

From there, the action went approximately 100 miles per hour. Joyce, Jonathan and Nancy turned up the heat at the shack, scarily burning out of Will the enemy within; Mike, Dustin, Lucas and a disoriented Steve survived a wild ride in Billy’s stolen car with Max (!) at the wheel to set ablaze the hub; Dustin was briefly reunited with Dart, who accepted a bribe of a 3 Musketeers bar to allow the kids to pass by him unharmed; and El, as Kali had once recommended, channeled her rage to close the gate to the Upside Down. As Bob would have said, easy peasy.

ONE MONTH LATER | Here was where things got super exciting. Flashing forward, we were shown that Murray, Jonathan and Nancy’s scheme had worked — their watered-down story of Barb’s death had gotten closure for her folks and resulted in the resignations of some of those responsible. (Though Brenner remained at large… ) Owens, having taken to heart Hopper’s plea to let their savior El lead a normal life, provided the chief with a birth certificate that listed him as the father of one Jane Hopper. Still, the doc advised that she lay low for another year. Could she have one night out? asked Hopper. Why? 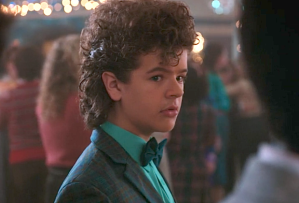 Cut to: the Snow Ball. Of course, the Snow Ball!!! El finally got to be Mike’s date. They even shared a kiss while dancing together in that awkward way that we all did when we were 13. They weren’t the only ones K-I-S-S-I-N-G, either. After Lucas fumbled his attempt to ask Max to dance, she led her “stalker” to the floor and shocked him with a kiss. A girl asked Zombie Boy Will to dance, too. As for Dustin, he refused to let it get him down that Max had chosen Lucas. But, although he’d given himself a totally tubular makeover and done his hair Steve style, all the girls shunned him. So Nancy — when not exchanging romantic glances with Jonathan — asked the youngster to dance and sweetly reassured him that, once those girls got a little older and smarter, they’d be lined up around the block to date him.

Meanwhile, outside Hawkins Middle School, Hopper and Joyce shared a cigarette like they had in the old days, and he warmly comforted her about Bob. (Maybe next season, Jim.) As the hour, and the season, concluded, the image of the school was inverted, revealing to us a far darker Upside Down version of it, the shadow monster looming as large as ever.

So, what did you think of the Season 2 finale? Grade it in the poll below, then hit the comments. Too early for Season 3 predictions/hopes/fears?