As Stranger Things neared the end of Season 2 with “Chapter Eight: The Mind Flayer,” a character I don’t think any of us ever imagined we’d come to love, much less love a lot, did more than just near his end, he was horrifically ended. So join me, won’t you, in remembering the finest — and final — hour in the life of, as he jokingly called himself, “Bob Newby, superhero”?

Picking up where “Chapter Six” left off, the episode began with the Demogorgons — or Demodogs, in Dustinspeak — emerging from the hole in Hawkins Lab, then laying waste to anyone who couldn’t outrun them. To keep Will from psychically revealing to the shadow monster where he, Joyce, Bob, Hopper, Owens and Mike were hiding, the boy had to be knocked out with a shot of anesthetic. But, though that got the group out of the fire, so to speak, they still weren’t out of the frying pan. To escape from the lab, someone would have to not only reset the breakers in the basement but override the security codes to undo the lockdown. Hopper volunteered, but for this job, they needed someone who knew computer programming… someone like Bob the Brain.

Bravely — and at times seemingly miraculously — Joyce’s boyfriend accomplished his mission and at last joined her at the lab’s exit, only to then — nooooo! — be pounced on by not one but a whole pack of Demodogs! Poor guy was still twitching when Hopper pulled Joyce away to head for her house with Jonathan, Nancy, Steve, Dustin, Lucas and Max, all of whom had wound up outside the lab. (And I know we all want Joyce to get together with Hopper, but damn if Sean Astin hadn’t made Bob someone you couldn’t help but root for! R.I.P., big guy.)

At the Byers residence, Hopper insisted on staying put until the military arrived. But the kids had other, better ideas. If they could kill the shadow monster — reasoning that it was like the brain of a larger organism — they could kill all that it controlled (the Demodogs, the vines, the works). Let’s do it, said Joyce. After losing Bob, she was out for monster blood! But how could they kill it? For the answer to that, they’d have to ask Will. And to do that without him inadvertently revealing to the shadow monster their whereabouts, he’d have to be kept in the dark about where he was.

The gang’s ingenious solution? Redecorate the toolshed out back so that, when a tied-up Will was awakened, he didn’t have a clue where he was. At first, he raged scarily, causing lights to flicker during his possessed tantrum. Then Joyce, Jonathan and Mike, by reminding him of special times they’d shared, broke through, prompting Will to tap out to them a secret message via Morse code: CLOSE GATE. 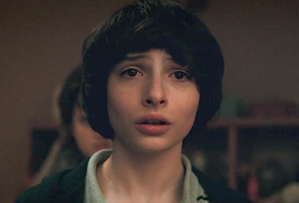 Just then, the phone rang inside, cluing in Will — and, with him, the shadow monster — to his whereabouts. Joyce re-knocked out her son, but it was too late: The Demodogs soon showed up. As our heroes armed themselves for the onslaught in the house, they could hear the creatures gathering outside, then — ack! — one came flying through the window! Only… what the… ? It was dead. Next, the lock on the door ominously turned by itself… the door opened, and… it was Eleven! She’d saved them! And not for nothing, but if the look she and Mike gave each other didn’t melt your heart, there’s a 110 percent chance you don’t have one.

IN OTHER DEVELOPMENTS | We got a sense of why Billy is such a d–k when his father and stepmom came home to discover Max gone. His dad didn’t just send him out to find his stepsister, he called him the f word and hit him, too. (Charmed, I’m sure.) After Dustin and Lucas argued about their both having broken their party’s rule of law — the former by lying about Dart, the latter by telling Max the truth about Will’s disappearance — Dustin offered to let Lucas’ girlfriend replace him in the group. And yes, Dustin was sure, Max was Lucas’ girlfriend; he’d felt the electricity when he saw them holding hands in the bus. Finally, while Max sweetly told Mike that she understood now why El had been so important to the party, he remained a total jerk to her.

So, what did you think of “The Mind Flayer”? Could Bob’s death have been any more heroic? Grade the episode in the poll below, then hit the comments.