Taking a page from The Wizard of Oz, Stranger Things made “There’s no place like home” the underlying theme of Season 2’s “Chapter Seven: The Lost Sister.”

Picking up at the conclusion of El’s blindfold session with her mother in “Chapter Five,” the episode began with Jane surmising that the reason Terry had so badly wanted to communicate with her was that she’d wanted her daughter to track down the other little girl who’d been with her in the rainbow room at Hawkins Lab. After spotting the kid’s picture in Terry’s files of missing children that she’d suspected, like Jane, were also special, El managed to locate the girl, now a young adult, in her mind. And, once she’d caught Becky trying to phone Hopper, El cleaned out her aunt’s purse, fled from her new home and hopped a bus to Chicago.

There, the tween made her way through a scary alleyway to an even scarier-looking warehouse where she found… the gang that we’d seen making a getaway in “Chapter One.” Among them was, of course, Kali, and once she and El had compared numerical tattoos, they realized their shared history, called each other “sister” and embraced. At last, Kali said, Jane was home. But was she really?

As the twosome got to know one another, Kali, whose gift was the ability to make people see (or not see) whatever she chose, explained that she now worked with her crew to exact revenge on “the bad men.” And, when El recognized on Kali’s board of evil-doers Ray, the Hawkins staffer who’d followed Brenner’s orders to shock Terry senseless, they had their next target. 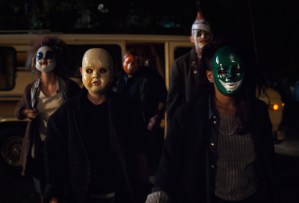 After giving El a “bitchin'” makeover and robbing a convenience store to stock up on supplies — including Eggos, natch — the gang descended on Ray’s place. As you’d expect, he pleaded for his life. As I don’t think any of us expected, he revealed that Brenner wasn’t dead and offered to take El to him in exchange for mercy. When she realized that her mental recon had — oops — missed the fact that Ray’s two children were home, she gave up choking the life out of him and even prevented Kali from shooting him.

Later, as Kali shared with Jane the story of how empowered she’d felt when she’d struck out on her own and stopped hiding her gift, El saw a vision — perhaps courtesy of her “sister” — of her so-called Papa, who taunted that the emotional wound festering inside her would eventually kill her. Off that upset, El was challenged by Kali: She could go back to Hopper (whose heartfelt apology she’d mentally heard) or stay and avenge her mother.

As the cops closed in on the gang’s hideout, El had another vision, this time of the dire ending of “Chapter Six,” with Mike trying to prevent the Demogorgons’ ambush and Hopper spotting the creatures entering Hawkins Lab. Her mind made up, she wouldn’t run from the police with Kali & Co., she’d make haste back to Hawkins. When Kali protested that El’s old friends couldn’t save her, she replied, “No. But I can save them.”

Finally, as if to underscore how right El’s decision was, when a nice old lady on the bus back to Indiana asked where she was going, our heroine replied, “I’m going to my friends. I’m going home.” And if that didn’t make you well up, you are officially dead inside.

So, what did you think of “The Lost Sister”? Hoping this won’t be the last we see of Kali and her merry band of misfits? Grade the episode below, then hit the comments.