In “Chapter Six” of Stranger Things’ Season 2, we learned how the shadow monster was like David Banner: You shouldn’t make it angry. You wouldn’t like it when it’s angry.

But, of course, Owens and Team Hawkins had already ticked off the creature in “Chapter Five” by torching it until they realized that, by doing so, they were also hurting Will. Back at the lab in “The Spy,” the scientists learned from the boy — whose own memories were beginning to fade as the entity spread in his head — that anytime they burned so much as a tendril, he felt it, too. So, Owens deduced, any hosts like Will who were infected with the virus possessed a sort of hive intelligence — they were connected. (Hence, Will’s knowledge of the shadow monster’s thoughts.)

To his credit, Owens — whom maybe I’d misjudged — argued that obviously, this meant that they couldn’t burn the vines to stop the virus’ spread; it would kill Will along with it. His colleagues weren’t so concerned about that. At the rate the virus was taking over Will’s head, they reasoned, he’d be dead soon, anyway. Luckily — or so we were at first led to believe — our young protagonist had a vision in which he directed Team Hawkins to a spot that he said the entity wanted to keep hidden from him.

Only, as Hawkins’ crew descended through the hole in the bottom of the lab and made their way to the area — the graveyard where Hopper had nearly met his maker in “Chapter Five” — Will tearfully apologized to Joyce. “It made me do it,” he cried. “They upset him.” What had he done? He’d sent the men in white into an ambush by a bunch of medium-sized Demogorgons! Once the humans were all dead, Hopper watched from the observatory as the first of the creatures emerged from the hole in the ground!

IN OTHER DEVELOPMENTS | After Nancy, Jonathan and Murray mailed out copies of Owens’ confession to a whole host of newspapers, they celebrated by getting so drunk that the reporter offered the teens his guest room for the night. When the kids protested that they were just friends, Murray called them on their adorable lie, and by breakfast the following morning, the twosome had finally not only kissed but become a couple.

Back in Hawkins, while Steve and Dustin left a trail of meat all the way to the junkyard to lure an (again!) escaped Dart, the older boy gave the younger one hilarious advice on everything from romance to haircare. (The secret to Steve’s fab coif? Four pumps of Farrah Fawcett spray.) When Lucas finally received Dustin’s Code Red message from his sister, he made a beeline for the trash heap, stopping only to get Max since he was about to have proof that every word of the tall tale he’d told her was true. 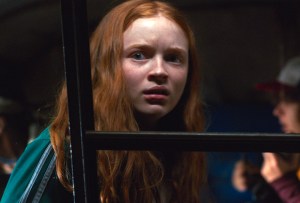 As the foursome awaited Dart’s arrival, Max opened up to Lucas about her parents’ divorce and how the family had left California because her mom had wanted to start over far away from her ex. She also acknowledged that she was as angry as Billy. But “I do not want to be like him ever,” she said. (No chance of that!) So it wasn’t entirely shocking when, as not only Dart but a whole bunch of mid-size Demogorgons trapped the quartet in a reinforced bus, the bonded twosome found themselves holding hands in fear.

For a minute there, it looked grim for the group — a Demogorgon was about to enter through the bus’ roof. But at the last second, the beasties all just ran off, having been summoned to — that’s right — the underground graveyard to ambush Team Hawkins. So, what did you think of “The Spy”? Are you relieved that Jonathan and Nancy finally coupled up? How hilarious a pair were Dustin and Steve? Grade the episode below, then hit the comments.