While investigating a series of underground tunnels lousy with malevolent Upside Down vines, the chief passed out after being, for lack of a better way to describe it, sneezed on by what looked like a supernatural anus. Upon awakening, he discovered that the tendrils had grown over his exit — he was trapped! After a failed attempt to burn away enough tentacles to claw his way out, Hopper found himself being attacked by the vines. They wrapped themselves around him like an army of boa constrictors and ultimately cocooned him much like they once had Will.

Luckily, help was on the way. As all of this was going on, Mike suggested to Will that, since he felt that part of the shadow monster was inside him, connecting them, he could keep tabs on the creature like a super spy. In no time, that theory was proven correct when Will woke up from a nightmare in which he’d seen Hopper. “I think he’s going to die,” he added. That not being remotely allowable, Joyce had her son draw the spot where he’d glimpsed the chief, then, with an assist from Bob the Brain, they and Mike figured out where that place was on Will’s giant map of the vined tunnels beneath Hawkins.

Finally, Joyce and Bob located Hopper and cut him loose… just as trucks from Hawkins Lab descended on the area. But it wasn’t quite “All’s well that ends well.” As the men in white began burning the underground vines, Will was thrown into a terrifying seizure, almost as if he was feeling the same pain as the tendrils! 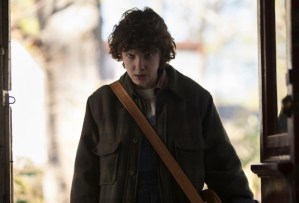 IN OTHER DEVELOPMENTS | Off the “Chapter Four” revelation that she has a mother, Eleven hitchhiked to Terry’s home and managed to use the blindfold technique to see what her mama wanted her to — that Brenner had delivered Jane, lied about her death and, after a gun-toting Terry tried valiantly to find her daughter, gave the pesky parent electroshock therapy to turn her into the vegetable that she’d been ever since.

Meanwhile, Nancy and Jonathan, while vaguely discussing the relationship they should have had a year earlier, brought their tape of Owens’ confession to Murray, who decided they could get justice for Barb only if they watered down the wild story. Lucas confided in Max the truth about Will’s ordeal, in so doing, inadvertently putting him even more on the radar of scary Billy. And by the hardest, Dustin trapped Dart in the cellar and shanghaied Steve — and his spiked bat — to help him deal with the sitch.

So, what did you think of “Dig Dug”? Didn’t you feel like Hopper was about to blurt out, “Joyce, I love you!” in the tunnel until he remembered that Bob was there? Grade the episode in the poll below, then hit the comments.