Sometimes a kid just knows it’s going to take more to get permission to keep a new pet than merely saying, “Mom, it followed me home. Can I keep it?” Case in point: Stranger Things’ Dustin, who in Season 2’s “Chapter Three: The Pollywog” wisely snuck past his mom the kinda cute, kinda gross tadpole-y creature that he’d discovered in a trash can at the end of “Chapter Two.”

After naming the chittering critter D’Artagnan — Dart for short — and discovering that it shared his love of nougat, Dustin set about trying to figure out what, exactly, he’d just just evicted his turtle from its terrarium for. Off a trip to the library — during which, rules be damned, he claimed the paddles that he needed to go on his curiosity voyage — he introduced Dart to his pals, including Max, and theorized that the beastie, which Lucas likened to “a living booger,” might be a whole new species. Whatever it was, it didn’t like heat.

Later, Will confided in Mike that he’d heard the same sound that Dart makes all around him in the Upside Down, and they hurried to prevent their friends from showing the creature to Mr. Clarke. Since the boys excluded Max from this excitement, as well as their AV-room debate about what to do if Dustin’s beloved pet really was from the Upside Down, she picked the lock, accidentally allowing Dart — who’d suddenly sprouted legs! — to escape.

Afraid that if Dart was taken, as suggested, to Hopper, it was as good as dead, Dustin took advantage of his being the one to find the critter to hide him under his hat (in spite of the fearsome roar with which the creature had greeted its protector). While the search was going on, Will had another episode, during which he recalled Bob’s advice to face his fears. Alas, telling the monster that reared up in front of him to go away did no good — as the hour concluded, it appeared that the evil was entering our hero like so much inhaled smoke.

IN OTHER DEVELOPMENTS | Watching a videotape of Will being bullied on Halloween, Joyce spotted in the background a hint of the same monster that her son had recently sketched. (Christmas-lightbulb moment!) Hopper realized that at the center of all the goopy, “poisoned” pumpkin patches was Hawkins Lab and told Owens, since he kept things hush-hush for the doc, the doc had better keep up his end of the bargain and keep his s— from infecting Hawkins. Nancy, upon being reminded of her fight with Steve, allowed their breakup to remain in effect, then teamed up with Jonathan to get justice for Barb. Step 1: Phone her parents, with the “bad men” listening in. 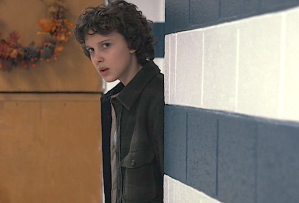 As for Eleven, she forgave Hopper for ruining her Halloween when he prepared them a “triple-decker Eggo extravaganza” breakfast. But she was still fed up with being stuck at the shack when she really wanted to be with Mike. “Friends don’t lie,” she yelled when Hopper told her for the zillionth time that things would be different “soon.” Finally, she broke his Don’t Be Stupid Rules and headed for Hawkins Middle School.

On the way, El spotted — and was spotted by — a mom playing with her daughter, a tableau that sparked a flashback to Hopper telling his ward that her own mom was “gone.” When at last the tween arrived at school, the frantic search for Dart was well underway. Though Mike at first lashed out at Max simply for not being El, she ultimately got him to lighten up, leading to El witnessing what looked like a flirtatious moment between them. Pissed, she used her powers to knock Max off her skateboard, making Mike wonder… could El really have done that? Was she nearby?

So, what did you think of “The Pollywog”? Were there actually sparks between Mike and Max? Grade the episode in the poll below, then hit the comments.