Remember how dismally Halloween went for the title Peanut in It’s the Great Pumpkin, Charlie Brown? (“I got a rock.”) Well, the holiday of happy haunting went even worse for Will & Co. in “Trick or Treak, Freak,” “Chapter Two” of Stranger Things’ Season 2.

As the hour began, Will was lying to his mom that the monster he’d just doodled wasn’t something he’d glimpsed during his “Chapter One” episode (prompting Joyce to seek out an obviously-still-smitten Hopper for reassurance that the boy was just suffering from the “anniversary effect” Owens had warned of). Later, when Will and his pals showed up at school excited to be dressed as Ghostbusters, they were horrified to discover that — What the… ?!? — they were the only ones in costume. Obviously, Dustin and Lucas couldn’t approach crush Max looking like dweebs… or could they?

Adorably, the twosome worked up the nerve to introduce themselves to Hawkins’ version of Charlie Brown’s “little red-haired girl” — who, if she wasn’t already, soon would be your favorite new character on any show in ages — and invited her to join them for trick-or-treating that evening. Dustin, working hard to have game, made it sound like such a big deal that she was being included in their party that Max called him presumptuous (which he hilariously took as a compliment).

Come nightfall, Jonathan, understanding of Will’s desire not to be handled with care (and eager to show up himself at the party Nancy’d encouraged him to attend), let him go trick-or-treating with his friends sans watchdog. It did not go well. First, the Zombie Boy was tormented by mouth-breathing bullies, then he had another episode, his scariest yet. In it, he was transported to the Upside Down and chased into hiding by the gargantuan new monster. 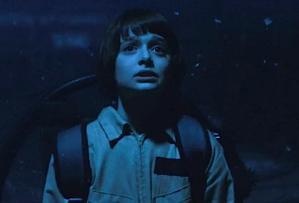 Once Will was found and snapped out of his vision, he and Mike bailed. The former was, as you’d expect, shaken up, and the latter couldn’t take another minute of Max “ruining the best night of the year” just by being present (and not being Eleven). And he didn’t seem to find it nearly as funny as I did that Dustin and Lucas thought their cool factor was being upped by their repeated attempts to say “totally tubular.”

IN OTHER DEVELOPMENTS | After Steve said it would be too dangerous to tell Barb’s parents the truth, Nancy angrily threw herself into his suggestion that they spend Halloween at Tina’s party just being “stupid teenagers for the night.” A few cups of “pure fuel” later, she was so drunk that she was calling their relationship “bulls—” and being tucked in by Jonathan. And here, Steve had started the evening thinking the worst was over when he had a run-in with Billy!

Speaking of whom, Max’s unstable stepbrother gave her her biggest scare of Halloween when he nearly ran her new friends off the road in an attempt to make her say whose fault it was that they’d had to move to Hawkins. Hopper discovered that — oh my gourd! — even more area pumpkin patches were rotting. And, in flashbacks, we saw how the chief had taken in El and made a home for her of a dusty old shack… which, being a tween, she was dying in present-day to leave disguised as a ghost to see Mike. 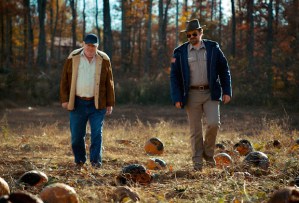 Unfortunately, not only did Hopper forbid El to go out, sheet or no sheet, he was late getting home for their junk-food-and-a-movie Halloween. So she holed herself up in her room, blindfolded herself in front of a staticky TV and reached out to Mike, who again was trying to contact her via walkie talkie. She was just about to psychically touch his cheek when… dammit, he shut off the walkie!

Finally, Dustin, again hearing noises coming from his garbage can, raised the lid and saw… Well, we don’t know what he saw. But, clearly astounded, his response to it was “Holy s—!”

What did you think of “Chapter Two”? Theories about the pumpkin plague? What’s in Dustin’s garbage can? Hoping Nancy’s Halloween fight with Steve will pave the way for Jonathan to get the girl? Grade the episode below, then hit the comments.