Disney Channel’s Andi Mack kicked off its second season on Friday with a breakup, a makeup and multiple game-changing shakeups.

The hour began with the news that Jonah and Amber finally split, and before Andi’s friends even had time to process the situation, he was already asking her to be his new girlfriend. Unfortunately, Andi found that she and Jonah had surprisingly little to talk about, leading her to worry that she might not be ready for a relationship. (Buffy echoing the same thoughts into her ear certainly didn’t help the situation.)

But Andi ultimately realized that the same nerves that kept her from completing full sentences around her new boyfriend prove they’re meant to be together, which makes sense to me. I guess. Either way, I was impressed with how maturely Andi handled Jonah and Amber’s private chat; most girls wouldn’t be OK with their boyfriend having a secret talk with his exes, even if her dad did recently lose his job.

Andi’s parents, on the other hand, were significantly less lucky in love this week. Despite a series of dramatic gestures from Bowie — including a pizza-flavored proposal — Bex determined that she just isn’t ready to get married. At least Celia got him a job at a nursery. That’s… something. 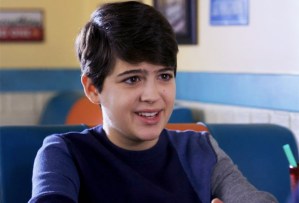 Of course, all of the above was immediately eclipsed by an emotional scene between Cyrus and Buffy, during which — as previously revealed by Disney Channel earlier this week — he told her that he has feelings for Jonah. The moment, while relatively brief, felt honest and realistic, so I’ll let the two characters speak for themselves here:

Buffy: Are you OK? Did you already order the baby taters?
Cyrus: I don’t want any baby taters.
Buffy: You’re scaring me.
Cyrus: I’m scaring me too.
Buffy: What is it?
Cyrus: Last night when we were watching Andi and Jonah, you asked me am I happy for Andi, and I said, “Yes, I’m happy for Andi.” But I’m also not happy.
Buffy: How come? … Are you jealous? … Cyrus, do you like Andi? … You like Jonah.
Cyrus: Buffy, I feel weird. Different.
Buffy: Cyrus, you’ve always been weird, but you’re no different.
Cyrus: I’m glad I told you.
Buffy: Me too.
Cyrus: But the thought of telling anyone else…
Buffy: You’ll be OK, I promise.
Cyrus: This is really bad timing. I just got a girlfriend.

Despite opening up to one friend, Cyrus insisted that he isn’t ready to tell anyone else — not Andi, and definitely not Iris. So he asked Buffy to be “patient and not judgmental,” which he recognized are not exactly her strengths.

Your thoughts on Cyrus’ new journey? Anything else from the premiere? Grade the episode below, then drop a comment with your full review.