Of all the dysfunctional relationships on How to Get Away With Murder — and there are many — it might be Annalise and Bonnie’s that tops the Most Messed-Up list.

As we are reminded in a series of flashbacks in Thursday’s episode, we’ve watched Annalise and her former colleague go through all sorts of emotional dynamics in the last three years: Bonnie begging Annalise not to fire her after it was revealed she had kissed Annalise’s husband; Annalise fiercely reassuring Bonnie that she does love her; Bonnie and Annalise sharing a lip-lock of their own when Annalise was particularly drunk one night. (And that’s to say nothing of their near-fistfight just two weeks ago.)

In the latest installment of Murder, we finally learn exactly how and why these two women crossed paths in the first place, all while Bonnie agonizes over her feelings for Annalise in a therapy session with Isaac. Here’s how it went down:

At the start of the hour, Bonnie arrives at Isaac’s office, desperate for a chance to talk about a confrontation she had earlier that night with Annalise. (Of course, Bonnie is still going by the name Julie Barden when she’s with her therapist, and she refers to Annalise as Mae.) “I lied to you,” Bonnie tells Isaac through tears. “I didn’t come here to get better. I came here to hurt her.”

But to understand all of the emotional baggage that Bonnie’s unpacking right now, we have to become privy to Annalise and Bonnie’s origin story — and, at long last, we do. The action flashes back to 2002, when Annalise was helping defend a councilman who had been accused, by Bonnie, of rape. Bonnie takes the witness stand to detail the awful things that the councilman did to her, and we’re reminded that however dark we thought Bonnie’s childhood was, it’s actually so, so much darker. (Case in point: After explaining that the councilman used to rape her on the couch in her father’s city hall office, Bonnie reveals that she’d also been abused by “dozens and dozens” of other men — including, as we already knew, her own dad — by the time she got to high school. Her entire testimony is enough to turn your stomach.)

Given Annalise’s own history with sexual abuse, she empathizes quite a bit with Bonnie… but when her boss tempts her with a promotion at the law firm if she can eviscerate Bonnie during her cross-examination, Annalise reluctantly accepts the challenge. The next day, Bonnie takes the stand again, and Annalise manages to convince her that her memory of the councilman might be a little fuzzy. After all, Bonnie had had negative encounters with plenty of other white men who looked just like the councilman, right? And it was 10 years ago, right? So maybe Bonnie isn’t remembering her experience correctly, and the councilman actually did nothing, right?

Annalise’s forceful cross-examination is enough to win the case, but she hates herself for putting Bonnie through the wringer and promptly quits her job at the firm. Instead, she tells husband Sam (hi again, Tom Verica!) that she wants to help Bonnie, and tracks down the girl the next day to tell her that (1) she left her job, and is now teaching law at Middleton, and (2) she wants to help Bonnie become a lawyer, given all the courtroom experience that Bonnie has had over the years. Bonnie accepts Annalise’s offer, and in a particularly bittersweet flashback, we see her arriving at Annalise’s house for the first time, all long-haired and bright-eyed and thrilled to be working with the Keatings. Sigh. 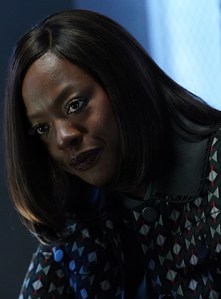 That brings us back to the present day, a few days before Bonnie’s emergency therapy with Isaac. Now that Annalise is closing in on the 40 inmate signatures she needs to file her class-action lawsuit, Bonnie is getting increasingly suspicious of whatever Annalise has got in the works — and Nate is no help to Bonnie, since he’s helping Annalise keep her plan on the DL. So Bonnie takes matters into her own hands: She goes down to the prison to find evidence that Annalise has been meeting with all of Virginia Cross’ former clients. And when she can’t find Annalise’s name on the visitor’s log, she requests to look at the security camera footage, which of course reveals that Annalise has been making several stops at the jail during the last few weeks.

And just when Annalise had finally locked down all the signatures she needed, Bonnie undoes all of that progress; she sits down with every inmate that Annalise had met with, reveals to them that Annalise is a recovering alcoholic who was nearly disbarred and offers them much more enticing deals than whatever Annalise promised them with her lawsuit. One by one, all of the inmates call up Annalise to tell them they’re rescinding their signatures — and Annalise, rightly pissed off, asks Bonnie to meet later that night.

“I was trying to do something good. This isn’t about me and you,” Annalise assures Bonnie. But Bonnie refuses to believe that Annalise’s endeavor was anything but self-serving, just like when she tried to help Bonnie all those years ago. “You made me into you, or you tried,” she tells her former boss. “You brought home the sad, trashy, abused girl and dressed her up like you.” Annalise gets the last word, though, when she tries to convince Bonnie that “I never saw you as nothing. You were never trash in my eyes. And now look at what you’ve done. Look at what you’ve done.”

Cue Bonnie running through the rain to Isaac’s office, where she’s been giving a narration of sorts to the entire episode. “Maybe I just made it all up, that we were the same,” she tells her therapist. “We were both abused, we both lost babies — but maybe that’s what screwed us up, too. She wanted a child, and I wanted to be what she wanted. I was so desperate not to be raped that I took what I could get, but that’s not love. That’s trauma.”

Eventually, Isaac urges Bonnie to say aloud three words that she really doesn’t want to utter: She loves Annalise. He tells her it’s the only way to move on, the only way to get past the abusive relationship with Annalise. And so, very reluctantly, Bonnie does it, repeating “I love her” through sobs over and over again. And after she finally has that breakthrough, she continues by saying that Annalise’s class-action lawsuit might actually be Annalise’s way of proving she’s getting better. And that’s when Isaac puts it all together: He’s heard Annalise talk about a class-action lawsuit before. He’s also heard her talk about firing some of her closest associates. Looking like he’s just been punched in the gut, Isaac tells Bonnie to stop talking. “Mae is Annalise Keating,” he gasps. “You’re the one she fired. Bonnie. That’s you.”

* As many a Murder viewer has suspected for months, we finally learn that Laurel and Frank — who have started to hook up on the regular again — did sleep together last season, during the brief period when Frank was staying at Laurel’s place. Despite what she told Wes at the time, she did cheat on him with her onetime beau… and now Frank is wondering whether he’s the real father of Laurel’s baby. Disgusted by his suggestion, Laurel seethes that sleeping with Frank while she was with Wes is the biggest regret of her life, and he’s never allowed to question who her baby daddy is ever again.

* Connor is becoming less and less enamored of the unemployed life, which is made even worse by Oliver’s long hours at his new gig as Caplan & Gold’s IT guy. So, after whipping up a home-cooked meal that Oliver won’t be back in time to eat with him, Connor gets drunk on a bottle of wine, comes thisclose to cheating on his boyfriend with someone he met via the Humper app, but instead goes to Annalise’s hotel apartment to vent about the nadir he’s reached in life. Fortunately, there’s a silver-ish (albeit blurry) lining: Once Annalise realizes that Bonnie has dismantled all her class-action efforts, she enlists Connor to help her get the lawsuit back on track.

* Michaela, meanwhile, is working with Oliver to try and uncover some dirt on Antares via Caplan & Gold’s files. They manage to get into Tegan Price’s computer after she leaves for the day, and even though their access is highly restricted, they are able to uncover a cease and desist letter that was sent to Trent Stockton — the former Antares employee who “died” under “mysterious circumstances” — a week before Wes was killed.

But Michaela’s consistently late nights at the office are taking a toll on her relationship with Asher, who’s starting to piece together that his girlfriend is up to something shady at her internship. Near the end of the hour, Asher drives over to Laurel’s apartment and gives Michaela a call from his car, inviting her to grab dinner with him. She lies that she’s helping Tegan with a “huge presentation” set for the following day — but she’s really conspiring with Oliver and Laurel about all things Antares, and Asher can see through the window that his girlfriend isn’t telling him the truth about her plans for the night.

Speaking of Asher, it turns out he’s a major part of the flash-forward we’ve been seeing each week. In Thursday’s episode, the time jump is short but crucial: After surveying the crime scene at Caplan & Gold, Bonnie turns to a man standing nearby and asks where the suspect is. “Jail,” he responds. And when the scene cuts to the local prison, we find Asher, sobbing alone in a jail cell.

OK, your turn! Your thoughts on Thursday’s latest Murder? Drop ’em all in a comment below.