Which Blindspot duo is going undercover? Are “Wild” times ahead for Arrow‘s Thea? Is The Originals getting its own Matt Donovan? Will “real life” cop-block Blue Bloods romance? Read on for answers to those questions plus teases from other shows.

What’s coming up on Blindspot? —Carlynn
As I hung out with the cast at Wednesday’s NYC premiere party, Jaimie Alexander got to raving about Audrey Esparza’s dance skills, which led me to suggest an undercover op where Tasha gets to do some twirling. That prompted Alexander to share this tidbit: “There will be something where she and I go undercover together, which is going to be very fun — and we will not look like ourselves, let’s put it that way!”

Will we learn if Blindspot‘s Nas was able to get any intel from Shepherd? —Katie
In a word, from show boss Martin Gero: “Yes.”

What are the odds that Blue Bloods‘ Jamie and Eddie are going to get together this year?! It’s been four long years! —Trenton
I brought this oft-asked Q to Vanessa Ray (as, she said, many a fan has!), and she concurred, “The Will They/Won’t They thing is fun for us to play. We’ll get a script and be like, ‘Oh! They’re have a scene where they talk about their relationship. What’s going to happen?'” But — and it’s a big one — “The reality is that in real life, we would not be able to work together” if romantically entangled,” Ray explained. “And that’s a very fun thing to play with because they love working together. They’re first and foremost best friends, and amazing partners.”

Anything you can share about Rumple’s connection to Alice on Once Upon a Time? —Rebecca
I don’t know about Rumple, but in this Friday’s episode, “We delve deeper into Alice’s connection with Weaver,” co-creator Adam Horowitz says, “and we start to see that she is very cemented in the world of Hyperion Heights. Her sort of mysterious past starts to be revealed.” Adds co-creator Eddy Kitsis: “We’re also going to find out about who she is as a person.” Looking a bit further down the rabbit hole, “In an upcoming episode, we’re going to learn about what happened to her in Wonderland,” Horowitz says, “and how her story differs” from that of the Once franchise’s previous Alice.

How do you think that Once Upon a Time‘s Regina/Roni is going to react when she find out that Henry has a daughter? — Tamara
As you requested in your email, I asked Lana Parrilla this question during the NYCC Q&A, and here is what she said: “Oh my gosh, it’s going to quite complicated…. [From Season 1 to now] it’s been eight to 10 years, so there’s been a lot of growth, even from where Regina left off in Season 6. She is having difficulty remembering [her true identity], but I think she’ll come around… and will want to be in their lives as much as she can.” 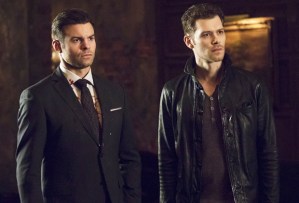 Do you know anything about The Originals Season 5? Any more characters coming back? –Joey
I can’t confirm any returning favorites right now, but the show is introducing a new character that sounds an awful lot like The Vampire Diaries’ Matt Donovan. The newbie’s name is Landon, and he’s described as a thoughtful, romantic kid desperate to escape his broken home and the small southern town in which it stands. Despite being human, Landon apparently has a shady past — and investigating it could lead him into the dangerous world of the supernatural. And Landon isn’t appearing until close to to the end of the show’s final season, so with that Hope-centric spinoff still on the table, it’s entirely possible that Landon’s story won’t finish on The Originals.

Anything for Jane the Virgin? —D.B.
The birth of Rogelio and Darci’s child will be “very dramatic,” executive producer Jennie Urman says. “The baby goes unnamed for a quite a while before they settle on something. They try out many names.”

Will “WildQueen” (Thea and Rene) be explored in Arrow Season 6? There have been instances of Marc Guggenheim being for the ship as well as Rick Gonzalez being pro-WildQueen to an inquiring fan at a con. —Amina
“I’m always ‘shipping Thea and Rene,” Guggeheim affirmed when I hand-delivered your question. And while Thea thus far has remained in her post-Lian Yu coma, “Yes, there will be Thea and Rene scenes,” the co-showrunner shared during our TCA Q&A. 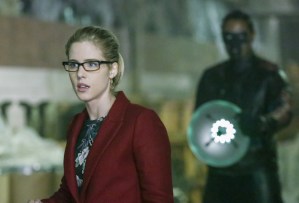 Now that Arrow‘s Felicity is starting her own company, what can we expect from that storyline? —Jennifer
Well, in addition to firming up what exactly her and Curtis’ startup is about, they’ll also need to come up with a name — and a good one apparently has been ruled out, if you keep your eyes on Felicity’s white board in this Thursday’s episode.

I’d love any spoilers on The Gifted, please? —Ash
As you may have surmised from the promo, something tragic from Agent Jace Turner’s past will be revealed through flashback in this Monday’s episode, allowing some more insight into his rather strong opinions about mutants.

Supernatural‘s recent Scooby-Doo tease has me hungry for more “Scooby Snax” about the big “crossover” episode. Got any to share? —Lou
After the Scooby-Doo nod in last Thursday’s episode, I think we all know to whom this is referring: “There’s a certain amount of expertise [by] a certain brother about what Scooby world is. We have fun with that,” exec producer Brad Buckner says of the show’s “charming and very funny” upcoming crossover with the animated classic. But more importantly, what’s faster — Dean’s beloved Impala or the Mystery Machine? “You’ll get a chance to see. Depends who’s driving it, I guess,” star Jared Padalecki says.

Will Eddie the Dog be on more Hawaii Five-0 episodes? —LadyDi
Very much so. In fact, Eddie will appear in the next episode, airing Friday, Nov. 3 — and he might also even wiggle-wag his way into the next cast portrait. 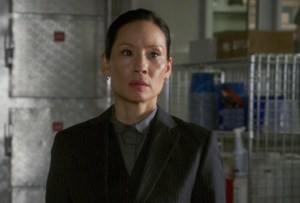 Anything new from Elementary or Timeless? —TVLover
I choose… Door No. 1! Early on in Season 6, “Joan will lose someone who was very close to her once upon a time,” exec producer Rob Doherty previews, “and she will learn that this person made certain assessments regarding the decisions Joan has made as a professional. It’s going to give her cause to look at choices she’s made and choices that she has right in front of her: Might she be a more complete person if she weren’t in a partnership with Sherlock Holmes?”

Any scoop on The Last Ship? —Shari
Seeing as she had already wrapped production on next season when I talked to her, Bridget Regan was careful not to let slip too much. But she did share that “in Season 5 we again jump ahead quite a lot in time, as we did for Season 4, which I liked. It shows that the writers are only showing you the really exciting stuff that’s happening in that world.” With the Red Rust problem solved, “The actual nuts and bolts of spreading the new healthy crop, feeding people… we skip ahead past that until we come up against our next big challenge.”

Real questions from real people get real answers! If you need the Inside Line on a favorite show, email InsideLine@tvline.com! (With reporting by Vlada Gelman and Andy Swift)