Riverdale‘s Black Hood killer didn’t claim any lives this week… but he still had everyone in town running scared.

While the masked gunman taunted authorities with a letter declaring he was punishing his victims for their sins, Archie decided to fight back by forming a group of vigilantes watchdogs called the Red Circle. Plus, Kevin and Betty had a falling out after she disapproved of his “night jogging” (aka cruising the woods for same-sex hookups); Hiram took Archie under his wing, and into his study, where the Lodge women aren’t allowed to enter; and Jughead made a new friend — fellow Southside Serpent Toni Topaz — who might actually be a better match for him than Betty. (You know, if Emily Strange and Winona Ryder from Beetlejuice aren’t available.)

We had a lot of questions, so we reached out to Riverdale showrunner Roberto Aguirre-Sacasa, who politely fended off all of our queries about the Black Hood killer’s identity. (Hey, we tried.) Plus, he admits that the Red Circle plan “could play out roughly for Archie,” addresses Hermione’s strange behavior this season and previews next week’s big break in the Black Hood investigation.

TVLINE | Is it giving away too much to say if the killer is someone we’ve seen on the show before?
A main character will be asking that very question, and it will be answered in an upcoming episode.

RELATED Riverdale‘s Lili Reinhart Shoots Down Betty/Archie Romance Rumors: ‘I Think That’s Over and Done With’

TVLINE | Fair enough. So Archie starts this Red Circle group, and you can understand how he feels helpless and wants to do something — but couldn’t this end up backfiring on him?
Of course it could! Basically anything Archie ever does, ever, could end up backfiring on him. [Laughs] That’s just the essence of his character. But yeah, absolutely. Even starting something with the best intentions could backfire, and I kind of get the feeling this isn’t even starting from the best intentions. It’s sort of starting from a darker place… and dark will have dark, you know what I mean? So I think this could play out roughly for Archie, for sure. 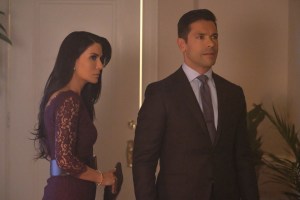 TVLINE | Hiram seemed to take a liking to Archie. But how much of Hiram’s interest is sincere, and how much of it is manipulation?
I think a character like Hiram… he’s a dark character. He’s sort of a villain. I think you’d be foolish to trust him too much. Hiram is playing a very long game with some people in Riverdale, and Archie’s one of them.

TVLINE | Hermione has been tough to read this season: She’s protective of Veronica, but she’s also snapped at her a few times. What’s going on with her, exactly?
You know, I love characters that live in the gray zone. I love characters that are driven by two different impulses. I think Alice is a great example: In some scenes, Alice is horrible to Betty, and then in other scenes, she’s fiercely protective and loving. And Hermione… she loves her daughter, and when she’s trying to protect her, that’s very real. But she’s a little more mercurial this season. The apple of Hiram’s eye is Veronica, and I think on some level, that rankles Hermione. I mean, Hermione never got to go into the study, so why should Veronica?

TVLINE | Kevin’s story was really poignant this week. It’s something we don’t often see on TV: being a gay teen in a small town, and not having a lot of options.
Yeah, that was one of the things we talked a lot about in the writers’ room. We actually talked about doing this story during Season 1, and we ended up not doing it. I love this story. I think Casey [Cott]’s work in this episode is really beautiful. I love his scene with Moose in the hospital. I love his big fight with Betty, and his stuff with his dad at the end. It is sort of retro looking, because cruising the woods almost feels like a 1950s thing… even though it still very much happens. We don’t really know too much about Riverdale’s social politics, so it’s nice to get these glimmers you can infer.

TVLINE | How serious is this rift between Kevin and Betty, though?
I would say it’s resolved in the next episode, yeah. They’ve been through a lot. 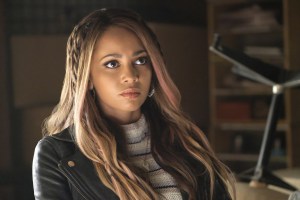 TVLINE | We also met Toni Topaz, Jughead’s new friend at Southside High. Should Betty be worried at all about her?
Yeah, I think Toni Topaz is a great character. I love the actress who’s playing her. She’s fun, she’s beautiful, she’s smart, she’s a little acerbic. She does seem to be more of a conventional Jughead type. Listen, I’d be worried if my boyfriend or girlfriend were going to another school, and suddenly was hanging out with this other person.

TVLINE | What’s coming up next week in Episode 4? You said that’s when the Black Hood investigation really gets started.
Two big things shake loose in Episode 4. One is, the investigation really starts to heat up. Who is this person? Why is he doing what he’s doing? Why our town? Why now? We do kind of play the investigation a little bit like in Zodiac, on a much smaller level. The other thing is, with the rise of the Red Circle, we start leaning into the rivalries between Riverdale High and Southside High, and the north side and the south side. I think that starts to come to a head. It’s sort of like “Black Hood killer fever” grips the town of Riverdale.