Going into Tuesday’s final Battles of The Voice Season 13, the general consensus seemed to be… meh. Yes, there have been some standouts. Jon Mero and Moriah Formica come to mind. Janice Freeman put on the kind of show that you can’t describe without adding “stopper” to the end of the word. And Stephan Marcellus really shocked the s— out of me Monday, he was so good. But still, overall… meh. Maybe the season wouldn’t really heat up till the field of contestants was whittled down (much) further in the Knockouts. (Maybe it never would?) At any rate, here’s the rundown of Tuesday’s performances, the good, the bad and the meh-diocre.

Team Blake: Adam Cunningham (Grade: A) defeated Natalie Stovall (Grade: A-) on “Boondocks” | In rehearsals, the Nashville vets were sounding as polished as Grammys, Natalie in particular displaying some real star quality when she quit multitasking, put down the fiddle and just sang. On stage, the teammates harmonized like they’d been doing it for years and sounded so authentically country, I think my ears will be hearing with a twang for the rest of the week. Which of them was better? Tough call — and Blake was right, it sucked that he was the only coach with a steal left — but I’d have to say Adam by a hair.

Team Jennifer: Eric Lyn (Grade: B-) defeated Ignatious Carmouche (Grade: B+) on “Unaware” | “I would listen to a whole record of Eric,” Kelly Rowland said in rehearsals. But even then, I was already leaning toward Ignatious, who sounded earthier and, at the same time, more commercial. During the Battle, Eric was probably technically on point. However, he just didn’t hold my attention the way Ignatious and his somewhat grittier, rawer voice did. Even if, as Blake suggested, Ignatious at some point went off the rails during his performance, he was just plain more interesting. Dubious call, JHud. Can’t imagine Eric surviving the Battles. 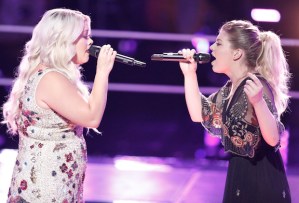 Team Miley: Ashland Craft (Grade: A-) defeated Megan Rose (Grade: B+) on “A Good Hearted Woman” — Megan stolen by Blake | In rehearsals, man, you could hear the whiskey in Ashland’s voice. No trying, it was just there. Megan sounded pretty… but, next to Ashland, pretty forgettable. Like she could be Ashland’s backup singer, not her competition. (Don’t get me wrong — she’s good. There’s just something special about that Ashland and her sandpaper vocal cords.) On stage, it was still Ashland’s performance that made my heart two-step, but Megan did make me regret that “backup singer” dig. She was rock solid. And hey, since it was the last Battle of the season, she was automatically stolen by Blake.

So, who did you think gave the evening’s best performance? You know the drill — the poll’s below and the comments section, right under that.