This week on The Flash, luck came in many forms as a meta with some very good juju brought bad times to Barry & Co.

As chronicled by The Thinker’s opening voiceover, Rebecca/Becky Sharpe (played by my new crush Sugar Lyn Beard) was a casino dealer who throughout life suffered myriad indignities — having a MySpace page in the year 2017 apparently among them. Her status as a self-described jinx was changed one day, however, when fresh from being canned she hot-footed it in fishnets to catch a life-changing bus ride.

Team Flash got wind of Becky’s special something when she was spotted casually robbing a bank, as assorted mishaps distracted guards and tellers. But how could she be a meta if she only came to town three years ago? With help from Harry Wells (who paid a visit from Earth-2 to deliver to Wally a “breakup cube” from Jesse), Cisco and Barry traced Becky’s traces of dark matter to the spot where Barry emerged from the Speed Force. The team then realized that when that happened, it spat out a wave of dark matter that created a city bus full of brand-new metas, Becky (and Deacon/Kilg%re) among them 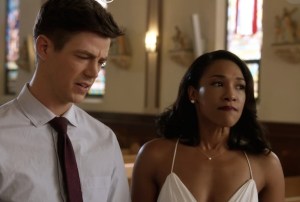 Approaching Becky as a well-meaning CSI guy, Barry thought the congenial lass would be receptive to his concerns about her meta nature. Instead, she argued that she merely was enjoying what had been coming to her after a life riddled with bad luck, and that those who momentarily suffered in her orbit could just tough it out. Alas, WestAllen went on to join that “bad luck” club, when Iris’ idea to fast-track their wedding — already waylaid by a burned-down dream venue — by glomming onto a church’s funeral reception got cut short by the priest’s violent allergic reaction to incense. (Shame on you, Kevin!)

Becky aka Hazard seemed like a minor menace… until she returned to the casino as a player and milked her good luck for all it’s worth. As a result, Central City was overwhelmed by a crushing wave of bad luck, in the form of faltering airliners, Joe’s house crumbling around Cecile and, most alarming of all, S.T.A.R. Labs’ particle accelerator switching back on and heading for another explosion! The Flash raced to intervene but tripped on spilt casino chips and managed to meta-cuff himself, just feet away from Becky and her two-verging-on-three slot machine cherries. Luckily, Harry  earned his Get Out of Jackass Jail Free card by suggesting to Cisco they let the particle accelerator explode, because when it did, the wave of energy reversed Becky’s good fortune, while saving everyone else from calamity.

In the aftermath, a variety of things happened. For one, Wally pointed out to the team that they saved the day… without him (and without even noticing that he was AWOL, #sad). Wally explained that he had been visiting Earth-2 to try to patch up things with Jesse, who earlier had jilted him by way of a “breakup cube,” but she wanted some time/space to figure herself out. So Wally bid Team Flash adieu to do same and crash with a bud back home in Blue Valley.

After that round of good-byes, Harry deduced that whoever sprung the “samuroid” on Central City did so knowing that it would lead to Barry being rescued from the Speed Force and in turn spawn a new batch of metas. But who, and to what end? Cut to The Thinker, noting to The Mechanic that he will always be steps ahead of Team Flash — in part because he is watching their every move via the “samuroid” helmet sitting on a shelf in S.T.A.R. Labs.

Lastly, in a non-ominous bonus scene, Joe returned home to find Cecile patching up the place. He then conceded that maybe it was time for the empty nesters that they are to sell his great-uncle’s money pit and buy a cozy place of their own. Funny thing, though, Cecile points out — she’s pregnant! And Joe is… agog!

What did you think of the episode “Luck Be a Lady”?