In the parlance of Mike Wheeler and friends, Stranger Things Season 2 is the Empire Strikes Back to the first season’s Star Wars, in that it’s a highly anticipated follow-up where the stakes are higher for a band of unlikely heroes. But also because just as Luke Skywalker spent much of that sequel on his own journey, so does Eleven here — which is perhaps the otherwise engaging sophomore season’s only shortcoming.

Releasing all nine episodes this Friday, Oct. 27, Season 2 of Netflix’s sleeper hit picks up in late October 1984, one year after the climactic, middle school classroom showdown between El (played by Emmy Award nominee Millie Bobby Brown) and the flytrap-faced Demogorgon. Halloween aka the boys’ favorite day of the year is nearing, and following a cold open set in another city and featuring a new character played by Linnea​ ​Berthelson, we find Mike, Will, Dustin and Lucas gleefully descending upon an arcade, where Dustin is gobsmacked to learn that a “MADMAX” has displaced him atop the Dig Dug leader board. That bit of teen lad trauma soon enough takes a back seat to something dark and twisty that is bothering Will, who as hinted in the final frames of Season 1 has not been able to put his past entirely behind him.

It seems you can take the boy out of the Upside Down, but…. 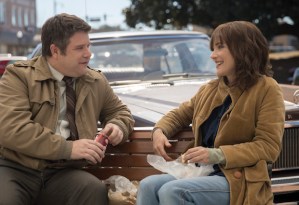 From there, upon Will’s first sighting of the ginormous, otherworldly entity that will come to be dubbed the Shadow Monster, things unfold…  slowly at first. But by Episode 4 the big reveals and frightful twists are being churned out on the regular, evoking ’80s fare such as Gremlins and The Goonies while sucking in Will’s mother Joyce (with her new beau “Bob the Brain,” perfectly cast with The Goonies‘ own Sean Astin), Sheriff Hopper and, of course, Steve and Nancy and Jonathan (who still are sorting through the tricky love triangle born of Season 1).

Along the way, Nancy and Jonathan also find themselves pursuing “justice for Barb.” Remember, the Upside Down victim’s disappearance officially remains a mystery — but perhaps it is one to be solved, her desperate parents hope against all hopes. You, as I did, may initially groan at the meta nature of this B-for-Barb storyline, but stick with it as it does take some characters to interesting places and steers toward a satisfying payoff.

In addition to Astin, new to the Season 2 mix are Sadie Sink and Dacre Montgomery as (yes, the Mad) Max and Billy, perpetually sparring stepsiblings who came to Hawkins by way of California. As Max catches the eye of both Dustin and Lucas, it sets up a perfectly charming, romantic tug-of-war that hands Gaten Matarazzo a showcase and finally fleshes out Caleb McLaughlin’s character, while her acceptance into the group thrusts all the boys into a quandary about how much to reveal about Eleven, her predecessor in their “party.” All told, Sink proves to be a fiery, feisty standout. Alas, Montgomery’s role is a more tedious one, playing a high school hothead who undoubtedly will gum up the works right when the heroes least need that to happen. Elsewhere, Paul Reiser (Aliens) plays a scientist trying to clean up the mess made by Matthew Modine’s Dr. Brenner, both literally as well as when it comes to diagnosing what’s spooking Will all this time later. 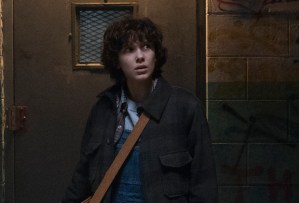 I’m not at liberty to divulge Eleven’s whereabouts during the year gone by, but suffice it to say we get a bit of a rewind of the Season 1 finale that details what happened to her immediately after sacrificing herself to vanquish the demogorgon, and how she came to be… where she is now at. (Cryptic enough for you, is that, hmm?) I and perhaps I alone had some issues with Eleven’s new existence as it was revealed — as you watch, ask: How might this look to an outsider? — but inarguably questionable was the decision to keep El separate from Mike & Co. for as long as Season 2 does. Yes, the journey she goes on possesses an importance (akin to Luke’s visit to Dagobah, hmm), but I can’t lie — it’s a considerable test of patience, no better exemplified than by one side trip that effectively hits “pause” on an actual Hawkins cliffhanger for an entire episode.

That said, the goings-on in Hawkins snowball during the second half of the season to deliver a rather breathless series of nailbiters, as a decision made in private by one of the boys comes back to haunt everyone, a brand-new visual puzzle manifests itself inside the Byers home and harrowing measures are taken to rid the small Indiana town of a creeping threat. I’d argue that the climactic finale is superior to Season 1’s, as it finds a way to involve every pod of characters in extremely meaningful ways. The 10-minute epilogue that closes out Season 2 is a magical thing that I won’t spoil one tiny bit further, other than to say you should wipe any tears from your eyes in time to clearly view its very final seconds.

THE TVLINE BOTTOM LINE: Stranger dangers plus fresh blood add up to a winning follow-up.