NCIS viewers have yet to learn much about Clayton Reeves, the MI6 Officer who was introduced two season finales ago. But in this Tuesday’s episode (CBS, 8/7c), that is about to change.

Just don’t tell series regular Duane Henry that he has been keeping a “low profile.”

“It’s not so much that, but…. I’m more what you call a ‘secret weapon,'” the affable English actor corrects with a wink and a laugh. “Pull me out when need be, because you don’t want to overwhelm people with my presence.”

In this week’s episode, titled “Fake It ‘Til You Make It,” Reeves sees a friend of his get kidnapped, and the primary suspect, NCIS later learns, previously pinched confidential military intel. Reeves, however, is a bit handcuffed in how much he can assist, seeing as disclosing his connection to the victim would reveal that they know each other — through Alcoholics Anonymous.

Keeping to himself as he does “is more a reflex” for Reeves, “growing up how he did with parents who’d been shipped around a lot,” Henry observes. But as this case breaks, “Boom! Dynamite lands in the water and everything comes out. Clayton doesn’t know what’s up, what’s down.”

All told, the episode “reveals a lot of things about Clayton and his character, and his demons,” says Henry. And in doing so, “I hope that it sparks a few brains of people who go through similar issues. It’s fun [to explore it] for the character, but the bigger issue and the message within are very important.”

The root of Reeves’ alcoholism will be hinted at — “You see a few things pop up, where people can make up their minds about what set it off,” Henry says — while the result of his disclosure will firm up some of the bonds he has formed since allying with NCIS. “You seem him especially opening up to Ellie (played by Emily Wickersham), having been friends with her for a while, and he finds that he can start to open up and get the family feeling from Gibbs (Mark Harmon).” Boss, though, might stop short of giving him one of those rare, coveted bear hugs. “But he does that episode every episode with the eyes,” Henry jokes. “We share a veritable hug.” 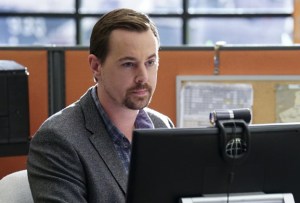 On the far lighter side of things this week, an embarrassing photo from McGee’s (Sean Murray) teenage years surfaces and becomes a popular Internet meme. Pressed to dish on the viral pic, Henry says, “I’ve seen a glimpse of it and it’s… different. It will definitely become a memorable image in NCIS and M.C.-GEE, as I call it, history. The hair is insane.”