Spock’s father Sarek beamed his way back onto Star Trek: Discovery this week, with Burnham rescuing her adoptive dad after his shuttle was sabotaged by a Vulcan extremist who believes that “humans are inferior.” With the help of a “synthetic mindmeld augment” built by Stamets, Burnham used her psychic connection with Sarek to locate his shuttle and save his life. 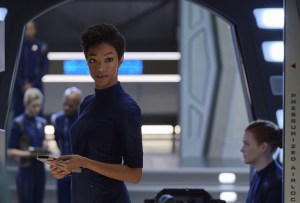 Plus, in a flashback, we caught our first glimpse of Sarek’s human wife Amanda Grayson — and heard our first Spock mention! — when Sarek was forced to choose whether Burnham or his son Spock would attend the Vulcan Science Academy… and chose Spock. Sarek and Burnham shared a tender moment when he admitted he “failed” her, but later, while he was recovering in the Discovery‘s sick bay, he snapped back into prickly Vulcan mode, coldly informing Burnham: “Technically, we are not related.” (Gee, thanks, Dad.)

TVLine reached out to James Frain (Orphan Black, Gotham) — who’s the latest actor to play Sarek in a Trek series, dating back to Mark Lenard in the original 1960s TV series — to discuss this week’s developments in Sarek and Burnham’s complicated relationship, the Amanda Grayson reveal and the challenges of playing a character who doesn’t show any emotion. (“It’s really hard, man!”)

TVLINE | Sarek and Burnham’s relationship is a tricky one: He’s protective of her, but also very standoffish. It’s kind of a push-pull.
I think that’s how she experiences him, for sure, and I think that’s probably how he’s experiencing himself. He has a very dynamic range, and he’s very, very bold with the way he’s chosen to live his life. He’s married a human being. That has made him a target. There are people who want to kill him for that. He adopted a human child, and there were people who wanted to kill her. So he’s put a lot of stuff on the line, and at the same time, he’s a Vulcan. He recognizes in this episode how different Vulcan and human cultures are, and how difficult a situation she was in. He never really understood that, I don’t think. And I think it’s kind of beautiful that he acknowledges that now. But there is a huge internal conflict that, in the original series, we saw in Spock, and now here we are, seeing it in Sarek. It’s kind of like Spock is his father’s son, you know?

TVLINE | Yeah, Discovery‘s Sarek is actually pretty rebellious for a Vulcan. He’s pushing back on a lot of the Vulcan ways.
Absolutely. It’s very clear, I think, in the flashback scene, when they tell him, “You’ve gone too far, and we need to rein you in,” and give him a punitive choice to make — which, obviously, is devastating for him. But he can’t not choose Spock. That’s his son. He’s half-Vulcan, and they’re basically saying, “We’d rather have the more Vulcan one of the two.” They don’t want [Michael] in, and they dump it on Sarek to bear the burden of that. 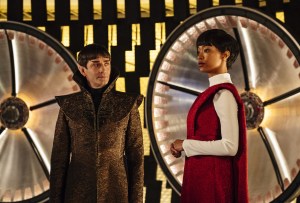 TVLINE | Sarek chooses Spock over Burnham, but then Spock rejects that and joins Starfleet instead. Does Sarek resent Starfleet, in a way, for that?
No, I don’t think resentment is quite it. He has a high regard for Starfleet, and Captain Georgiou. He handpicked her as the captain to educate Michael. It’s Michael who feels that this is some kind of demotion. But really, as he confesses in this episode, he failed her. He put her in an impossible situation, and then he places her in a much better situation where she can be with her own kind and learn who she is as a human being. He can’t do that for her.

He’s also admonished for making an emotional choice, and he has to kind of toughen up and be very clinical in how he delivers this information to her, because he’s just been told he has to be. The Vulcans, I often think of like the samurai: a very, very coded and strict, but noble and honorable society. You wouldn’t expect a samurai father to suddenly become a hippie just because he wants to make peace. He can’t step completely outside of himself. But he does give her a piece of his soul, and that’s no small thing. So it’s very, very rich and complex: his relationship to Michael, and his relationship to Starfleet.

TVLINE | We also see Sarek’s wife Amanda Grayson for the first time on the show, which is a big Easter egg for fans. Will we see more of their relationship? Because we haven’t seen that a lot in past Treks.
No [we haven’t], and it’s one of the starting points, when you’re looking at Sarek as a younger man. We just accepted, in the original series: “Oh, he married a human, and that was the backstory for Spock.” But it’s like, “Wait a minute… he married a human?? How did that happen?” It’s less extraordinary that he adopted Michael than that he married Amanda, and has this child [with her]. That precedes Michael. So yeah, I think there’s so much there to explore, dramatically, and I’m looking forward to it.

TVLINE | As an actor, how do you approach playing a Vulcan who shows no emotion at all? It almost seems like the opposite of acting.
[Laughs] I know… it’s really hard, man! I’m constantly kind of checking with the directors as we’re filming: “Is that calibrated right?” It feels like walking a tightrope. If you have no emotion, then there’s nothing there. There’s considerable repression, as you would find in the samurai society, or even in 19th-century England, when people operated in a very structured way. There’s a tension between how they behave and what’s inside… and I think that’s really the key to Sarek, for me.