Are you ready to feel old? Jack wasn’t, either, in Thursday’s Will & Grace. But he didn’t have a lot of choice in the matter when a moppet came knocking at Will’s door asking if he had a son named Elliot. Yes, Jack replied. But “like my friend Will and his hair, we had a falling-out years ago.” Turned out, the moppet in question was Elliot’s son, Skip — Jack’s (gasp!) grandson! “Can I call you Grandpa?” he asked Jack. “Oh my God, you have to,” Will answered giddily.

Jack was, of course, stunned to learn that Elliot had had a son. Then again, they hadn’t spoken since Elliot married an ultra-conservative Texan and left his father off the guest list for the wedding. Regardless, Jack was tickled to realize, thanks to Skip’s affinity for sitting in pajama-party position and worship of Karen (“Jesse Tyler Ferguson, she is fabulous!”), that the boy was gay. That being the case, Gramps assumed that the camp to which Skip’s folks were sending him in upstate New York was one of the theater variety. Only after a brief, awkward reunion with Elliot (Michael Angarano, reprising his role) and introduction to wife Emma did Jack and Will learn that Skip was headed for Camp Straighten Arrow “so I can be normal.” 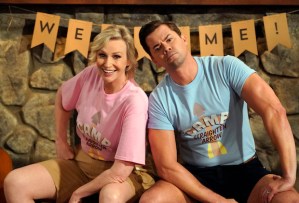 Leaping into action, the dynamic duo headed — no pun intended — straight for the conversion camp to rescue the lad. While Will set off to distract the counselors — yeah-right-totally-heterosexual newlyweds Reggie (Andrew Rannells) and Roberta (Jane Lynch) — Jack ran into Elliot, who argued that his dad didn’t have to agree with his and Emma’s beliefs. “You can’t judge someone for who they are,” he said. And, since he was saying it at a place that did exactly that, Jack could only respond, “I have never been 100 percent clear what irony is, but I’m pretty sure that’s it.”

As Will’s diversionary tactics led to his invention of a rival conversion camp and a steamy lip-lock with Reggie, Jack sweetly counseled Skip that neither this nor any camp could “fix” him, because he wasn’t broken. Furthermore, Grandpa promised, it gets better. And miraculously, by the end of the episode, it had. Back in Manhattan, Elliot stopped by Will’s to tell Jack that, after their talk, he’d seen things for the first time through his dad’s eyes and pulled Skip out of Camp Straighten Arrow. And, in what seemed to mark a new beginning for the estranged pair, he invited Jack to take Skip to see his first Broadway show. 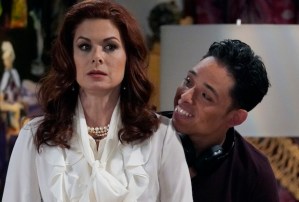 In the B plot of “Grandpa Jack,” Karen couldn’t believe that Grace had them working on a Saturday morning. At that hour, “you should be slinking home with your contacts in a shot glass, scratches on your back and itches on your front,” she told Grace. Did she want her lady parts to become a fireplace she never used? Grace should, Karen advised, “open up the flue and put a big log in there.”

At the office, Karen, at Grace’s insistence, apologized for sexually harassing Tony… by calling out, “Hey, Puerto Rico!” and tossing him a roll of paper towels. Afterward, she drew the conclusion that Grace hadn’t hired their buff young colleague as a toy for Karen but for herself. Though Grace, naturally, denied it, when she and Tony later bonded as vocalists, she couldn’t help but be overwhelmed when he put his hands on her to show her how to sing from the diaphragm. So finally, she decided that she could no longer ignore her hooha, Sophia — she was going to put herself back out there.

What did you think of “Grandpa Jack”? Wasn’t Grace’s “Green Finch and Linnet Bird” the battiest thing you’ve heard in… maybe ever? Hit the comments.