Sure, he’s living in a gorgeous mansion stacked with state-of-the-art amenities, but what good is any of that when you barely know how to boil water?

“One of the things that struck me when I spent time in the actual White House was the bubble that the president is in,” Tony Goldwyn tells TVLine (in Fitz’s defense). “For eight years, Fitz hasn’t had to do anything for himself. It’s actually been even longer for him, because he was a governor before that, so he’s lived a fairly cloistered life for many years. He also never had to do domestic work; he had his mom and some household staff growing up, then he had Mellie. It would be an incredibly difficult transition for anyone, but it’s especially fun to see him completely out to sea.” 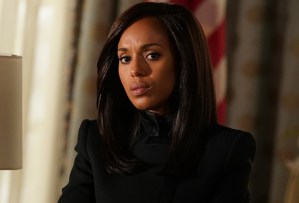 And then there’s the Olivia Pope of it all. “Vermont,” for so many years, was a hopeful concept that held the promise of a happy ending for Liv and Fitz. Yet here we are, finally in the promised land, and there’s no Olivia in sight.

“The whole reason he built this house was to live with Olivia and build a family,” Goldwyn says. “For Fitz, ‘Vermont’ always included Olivia. That was the fantasy. But since he and Olivia have been estranged and things have gotten complicated, I don’t think he’s gone to the house very much. It would be too painful. So it’s quite a shock when he finally walks into that place and there are all the ghosts of what he imagined his future would be.”

Still, Goldwyn isn’t ready to give up hope. He believes that “we as human beings have a limited view of what constitutes a healthy relationship,” and that Fitz and Liv’s trials have the potential to strengthen them as a couple.

“The truth is that going through tremendous personal challenges together and rediscovering someone on the other side can be the ingredient for a profoundly rich relationship,” he says. “Until you’ve gone through those gauntlets, I don’t think so. So I don’t think they could have a healthy relationship right now. Fitz is in quite a healthy place, but Olivia is not. She’s in a very dark place, having made the choice to essentially become her father. If she continues down this trajectory, I don’t see how they could work.”

Your thoughts on the state of Liv and Fitz’s union? Drop ’em in a comment below.