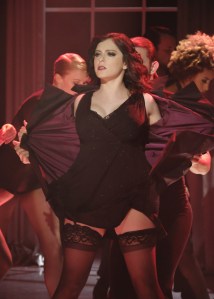 In her ongoing effort to annihilate Josh Chan, Rebecca turns to the worst person she knows: her amoral boss, Nathaniel. “Strip Away My Conscience” — which you can watch in full above — is a jazzy, Bob Fosse-style number, with Rebecca doing a striptease for Nathaniel, flanked by scantily clad backup dancers, and tempting him to teach her how to be bad like him. “There are little flourishes of reminding us it’s a comedy song: I remind him that the thong is up my butt,” Bloom tells TVLine. “But this is a pretty sexy number.”

Rebecca and Nathaniel “are in this sort of Dangerous Liaisons, f–ked-up sexual manipulation game,” Bloom hints, “and she says, ‘If you help me take down Josh Chan, I’ll let you do anything you want to me.’ Which is literally almost a direct quote from Cruel Intentions.” (Sounds like Rebecca’s been renting more than just Fatal Attraction, huh?)

Nathaniel just has to lay back and watch… which Scott Michael Foster didn’t mind. “It’s an easy day for me,” he admits. “They’re like, ‘Basically, we’re going to have ten people dance around you’… Fosse dancers clad in black, talking about taking their clothes off.” But he notes that Nathaniel might not be as coldhearted as Rebecca thinks, considering his newfound feelings for her: “He tries to push it away and focus on work and be a man who doesn’t have feelings. But that doesn’t succeed so well. He’s like the Grinch. His heart’s starting to grow a little bit, and he doesn’t know why.”

Press PLAY above to watch “Strip Away My Conscience,” then hit the comments and tell us: Should Rebecca and Nathaniel end up in bed together, for real?