Riverdale went retro this week with a throwback night at Pop’s diner… but I’m a lot more worried about the town’s future, actually. 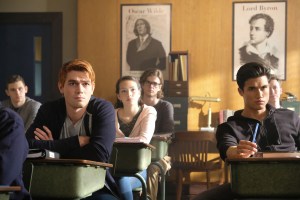 Pop’s is now a ghost town, thanks to Fred’s shooting; vandals have even spray-painted “DEATH DINER” on the walls. (Hey, Fred didn’t die! Fact-check your graffiti, people!) And Archie’s still on edge, chugging energy drinks and pressing Sheriff Keller about finding the masked gunman. He goes further off the rails when he learns of Miss Grundy’s death, and is convinced her killer is the same guy who popped Fred at Pop’s. He even asks Reggie to hook him up with some of that sweet “jingle-jangle” so he can stay vigilant.

The coroner declares Miss Grundy’s death a “crime of passion,” but Archie freaks out when he learns the murder weapon was the cello bow he gave her. To him, it’s a clear sign the killer is targeting him, and urges Sheriff Keller to look into Miss Grundy’s ex-husband. Even though Keller says the guy has an alibi, Archie won’t let his guard down. When he spots a masked figure lurking outside his house, he tackles the guy… but it’s just Reggie, pulling a prank. Reggie warns him he’ll need more than a baseball bat if he really wants to take down the gunman, though.

Betty and Jughead spruce up Pop’s for a ’50s-themed Retro Night, with guys in soda-jerk attire and girls delivering milkshakes on roller skates. But Archie can’t shake visions of Fred bleeding on the floor. So he meets Dilton in secret, with the school nerd handing him a backpack with a handgun in it. And Archie might have the right idea after all: Moose and Midge — two more of Reggie’s jingle-jangle customers — are enjoying a make-out session by Sweetwater River when the masked gunman approaches their car… and shoots them both dead. 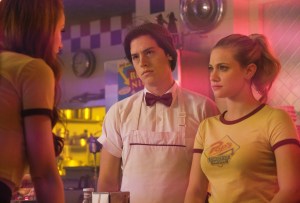 A LITTLE LIGHT PERJURY | Jughead learns his dad F.P. is facing 20 years in prison if he pleads guilty to his role in covering up Jason Blossom’s death. Distraught, he turns to the Serpents, who point him to a certain “snake handler”: Penny Peabody, a Serpent-friendly attorney operating out of the back of a tattoo parlor. She advises Jughead to get the victims to plead for leniency on F.P.’s behalf. But Cheryl Blossom is still furious about what happened to her beloved brother, and her mom Penelope would prefer to see F.P. fry in the electric chair. (So that’s a no, then?)

Betty won’t take “no” for an answer, though: She corners Cheryl and threatens to expose the video of her dad Cliff shooting Jason if she doesn’t support F.P. in court. (Hi, Dark Betty!) Cheryl calls Betty a “stone-cold bitch,” but respects her moxie: She not only vouches for F.P., but lies in court that she overheard Cliff pressuring F.P. to cooperate by threatening Jughead’s life. The judge agrees to reevaluate F.P.’s sentence… but F.P.’s not thrilled. He warns Jughead not to get mixed up with Penny Peabody: “You do not want to be in bed with a snake charmer.” 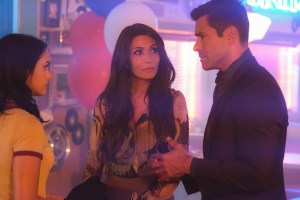 DADDY MAY CARE | Veronica’s still giving her dad Hiram the cold shoulder, and when Pop’s gets sold to “an anonymous buyer,” she accuses him of buying it to win her affection. She thinks he must have been behind Fred’s shooting, and shows Hermione the letter he wrote her from prison, threatening consequences for Hermione if Veronica didn’t testify on his behalf. But Hermione has a confession to make: She wrote that letter (!) to convince Ronnie to testify. (Evil!) Veronica writes them both off: “You two deserve each other.”

But after a talk with Jughead, who reminds her not everyone has a dad around to forgive, Veronica softens a little towards Hiram, and agrees to give him another shot as long as there’s “total transparency” between them. Hiram gratefully agrees, and even offers to make a “charitable contribution” to Pop’s. But that pledge of transparency is over before it even starts: Hiram actually did buy Pop’s, and is paying off Pop to stay quiet. And he did write that letter! Hermione lied to protect him! (Even more evil!)

* Thoughts on Josie and the Pussycats’ cover of Kelis’ “Milkshake”? I found it to be a sugary-sweet slice of pop perfection, myself.

* Another week, another horror-movie reference from Jughead, who noted that a baseball bat-toting Archie looked like “a Dream Warrior from Nightmare on Elm Street 3.” (Yeah, crank up the Dokken!)

* Kind of weird that Veronica hasn’t introduced Archie to her dad yet… even when they’re both sitting in the same diner together?

* Cool to see comics mainstay Midge make her Riverdale debut. Bummer that she died in her very first episode.

* Veronica’s kindly old doorman Smithers got replaced by a newer (hotter) model named Andre. Have to think he’ll figure into the drama somehow — maybe as a spy for Hiram?

* Line of the Week goes to Cheryl, when she greeted Jughead and Betty at the door of her creepy new home with: “Hobo. Bride of Hobo.”

Got thoughts on this week’s Riverdale? Grab a booth in the comments below.