Atwater’s family life and work are colliding in a dangerous way on Chicago P.D.

During this Wednesday’s episode (NBC, 10/9c), a case hits close to home for the detective when his neighborhood’s “no snitch” culture stalls Intelligence’s homicide investigation. Having grown up in the area, Atwater understands “that there’s a disconnect between cops and black people in the community,” LaRoyce Hawkins tells TVLine. “There’s no trust, and when there’s no trust, you get little to no cooperation.”

While Atwater has personal ties to the neighborhood and knowledge of its complicated dynamics, that’s not what’s driving him to step up during the investigation. “He’s motivated by helping out his partner” — it’s Ruzek’s source who is killed — “and protecting his family, and trying to find justice for other families,” Hawkins says.

When Atwater’s own clan gets tangled up in the case, the detective is put in a difficult situation not unlike the one he often has to coach witnesses through. “He finds himself having to probably sacrifice the safety of his family” to do what’s right, Hawkins previews. 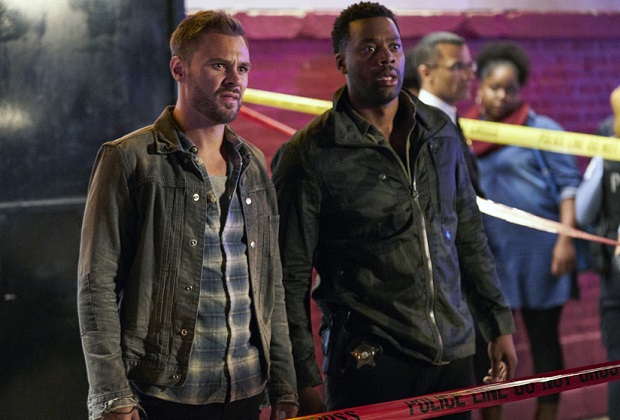 As for Atwater and Ruzek’s season-premiere clash about the latter’s “belligerent” behavior toward a black man while on the job, Hawkins doesn’t believe that the disagreement has broken the duo’s professional or personal bond. “Those brothers are best friends,” the actor says, adding that during “those tough conversations,” both characters “make solid points. They both express an argument and a side of the table that should be heard and is very, very valid… I think they’ll take a bullet for each other right now. But in those moments, they [teach] each other something.”

In addition to the tension between Atwater and Ruzek, you might have sensed some flirty chemistry between Atwater and the morgue worker/tipster in the season opener. “To be honest with you, they probably had to tone it down. The actual flirtation on the day might have been a lot more powerful than what we saw on television,” Hawkins says, joking that the producers are probably scared to give him a love interest “because the tension is so palpable that they might have to put the show on HBO or something.”

Got thoughts on this season of Chicago P.D. so far? Drop ’em in a comment below.