This week on Fox’s The Gifted, Caitlin and the kids made a run for it, only to run head-on into trouble, while Reed readied to upend the underground and Clarice “received” the motivation needed to push past her portal problem.

Convinced that she could be doing more to help Reed’s cause, Caitlin plots to sneak out of the way station in the middle of the night, and both Andy and Lauren tag along to protect her. En route to her brother/Uncle Danny’s house and in need of cab fare, Andy suggests he uses his power to rob a bank, but he settles for cracking open some parking meters (even if the coin counting irks their taxi driver). The welcome they receive from Danny is… not warm, at all, given their fugitive status and the nasty looks he has been getting from chums at the golf club. But after an impassioned, desperate Caitlin states her case, that her family is Danny’s family, he agrees to let them stay the night.

Andy reconnects with a teen cousin over some videogaming, though the lad is frankly more interested in Andy aka De-struck-to’s powers. Lauren meanwhile realizes via social media that their vacated home has been vandalized with anti-mutant epithets. Come morning, all hell breaks loose when 1) Johnny and Marcos wake Caitlin up from Danny’s sofa, having gotten wind of her flight from HQ, and 2) gun-toting locals (including even Cait’s swim team pal!) surround Danny’s house, all because of a picture of a trophy that Andy disfigured making the rounds. Danny does his best to assuage his neighbors, only to get decked for his efforts. Marcos then uses his powers to fend off the bullies and allow them to drive off.

The locals give chase in their pick-ups, with guns a-blazing, and Lauren is unable to use her own power to blockade them. (She can’t throw air to where she can’t see.) Marcos gets word to the way station that they need help, so Dreamer goes against Johnny’s earlier-expressed wishes and uses her power to plant a memory in Clarice’s head, that she and Johnny are lovers — the idea being that, as Johnny explained to Clarice earlier, she needs something “positive” (instead of fear) to motivate her to get portalling again. Spurred by a vision of her (though actually Dreamer) in a sssssteamy clinch with Johnny, Clarice successfuly pops open a portal in the middle of the road, through which Marcos drives the truck, leaving the bullies chasing no one. Returning to HQ, Johnny quickly realizes what Dreamer did — though she is all too aware of the consequences (seeing as she just hand-built a love triangle!) 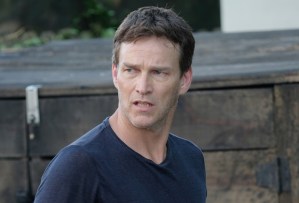 * Reed begrudgingly went through the motions of making good on his deal with Agent Turner, by reaching out to the flickering bartender from where he and Marcos first met up and claiming he escaped Sentinel custody. But when the barkeep accommodates Reed by putting him in a transport van with a kind mom (whose power soothes Reed’s pain from the immobilization charge) and child, Reed rethinks his betrayal, reveals the ruse to his helpers and throws himself from the van mid-drive. When the bartender disappears the van, Agent Turner warns Reed he’s made the biggest mistake of his life. Later, Dr. Roderick Campbell gives Turner a ring, expressing his great interest in the Struckers and proposing a partnership, but Turner isn’t into sharing Sentinel assets, so he firmly declines.

* There were two Lorna scenes this week: the episode opened with a flashback to when she and Marcos had first met, and she demonstrated how she could levitate herself thanks to steel-toed boots and metal cuffs.  (Then in a romantical moment, they realized their touched hands could create an aurora borealis.) Later in a present day scene, Lorna endured the pain of her “flea collar” long enough to rip the large metal door from her cell. The experience, however, left her drained and gushing blood from her nose, to which an arriving female guard coldly cackled.

What did you think of the episode “eXodus”?