Jane the Virgin is smitten — and not with Rafael!

After suffering the devastating loss of her husband Michael last season, the titular heroine finally seems ready to open up her heart in a real way during Friday’s Season 4 premiere. And while she was about to confess her feelings for baby daddy Raf at the close of last May’s finale, it’s first love Adam (recurring guest star Tyler Posey) who has the gal all googly-woogly, as Alba puts it. 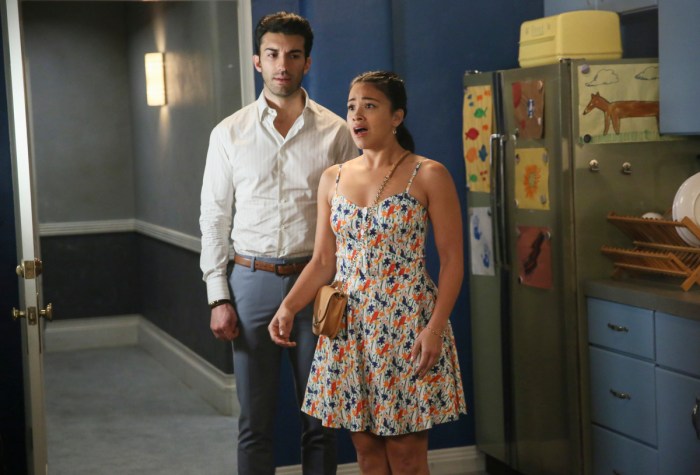 When Jane was 19, she fell hard for the bad boy, and even planned to marry him after only eight months of dating, much to Xo and Alba’s disapproval. But when the big day arrived, Adam couldn’t go through with the wedding, breaking Jane’s heart. Now Michael’s letter has brought the former couple back together, restoring Jane’s faith in “meant to be.”

Adult Adam is more mature, says all the right things and makes Jane smile in a way that she hasn’t in a very long time. Plus, he’s an illustrator, so he and Jane go together like peanut butter and jelly. Sounds great, right? Too bad Jane can’t ignore her feelings for Rafael, who’s moved in with the Villanuevas after getting kicked out of the hotel by Luisa. Jane leaves a perfectly good date with Adam to talk to Rafael, and comes home to find that he’s left her a glass of wine with a “I’m in the shower” note. Mistaking it as an invitation, Jane downs the booze and starts to strip down. But before she can enter the shower, Rafael announces that he paid for Mateo’s school tuition with the money from his son’s trust fund. Jane furiously redresses while even more furiously yelling at Rafael for making that decision without her. She doesn’t want Mateo attending a school with “people like that,” who only care about money, which Rafael interprets as people like him.

“I am done feeling guilty because I don’t want Mateo to have some small life, where he counts pennies and doesn’t get on a plane until he’s 20 years old!” Rafael exclaims.

Jane fires back with an even more powerful punch: “If Mateo grew up to say something like that, I would feel like I failed as a parent.”

So much for a Jane and Rafael reunion. Jane is all #TeamAdam now. And for the record, Xo and Alba told Adam not to show up for the wedding all those years ago. Meanwhile, Rafael assures Petra that he absolutely wants to be with her, and she accepts with a kiss. 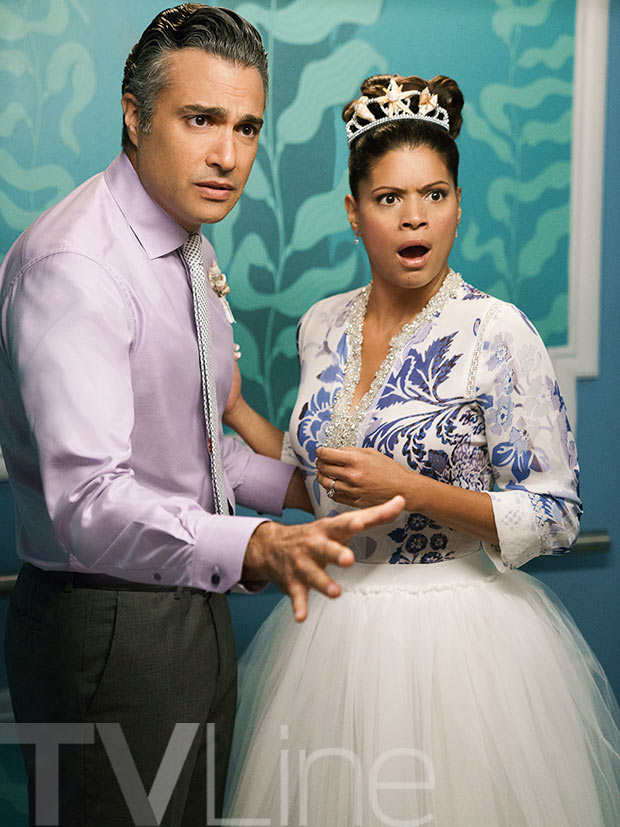 * Inspired by how careful Jane is being with Rafael because he’s her son’s father, Xo urges Rogelio to end his feud with Darci. But first, he storms into Darci’s sonogram appointment and accidentally broadcasts her vagina to his millions of Instagram followers. Then when Rogelio goes to make peace with Darci, she goes into labor.

* Petra survives Anezka’s attack, of course, and discovers that Luisa and her twin sis were planning to stuff her in a storage locker. So Petra pretends to be Anezka pretending to be Petra, and plots with Rafael to take back the hotel from Luisa. They pull together the cash needed, and everything is going well until Anezka resurfaces and exposes Petra.

* In a hilarious running gag, Adam the Virgo has his own female narrator, who keeps trying to make the story about him and is so not a fan of whenever the show cuts to Petra. “I’m sorry, who is this rando?” narrator lady wonders. On behalf of Petra, how dare you!

* Luisa needs cash, and she needs it bad because she’s got to put $100 million in Sin Rosetro’s Caymans account. Speaking of the villainess, the premiere ends with her strangling a man after he promises to take a secret to his grave.

* Rafael hogs the shower. A lot. As a result, he’s shirtless – or in a tank top – for most of the episode. Even Alba can’t help but notice his muscles.

Jane fans, what did you think of the season opener? Grade it via the poll below, then hit the comments to back up your pick!