Rebecca Bunch hit upon the perfect way to ruin her ex Josh Chan’s life in Crazy Ex-Girlfriend‘s Season 3 premiere… but she had to get a few bad ideas out of her system first. 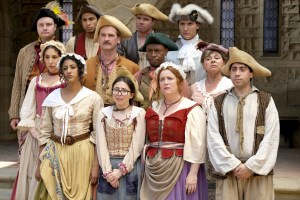 Rebecca’s gone completely AWOL as Friday’s premiere begins, which leads into a Disney-flavored opening number, with Rebecca’s friends and co-workers dressed as peasants and gossiping about where she could possibly be. She’s actually holed up in a hotel, depressed and struggling to go on living after Josh’s betrayal. But soon, she finds the strength to fight back and heads to the drugstore — stepping on a pretzel on the way! — to rent Fatal Attraction… and pick up some hair dye.

The next day, Rebecca surprises her law-firm colleagues by spinning around in a chair, revealing her new darker hair color and a va-va-voom white dress. (“I know. My hair is dark, so I look evil, but I’m wearing white, which is ironic.”) She’s been through a metamorphosis, she announces, and has “emerged from the cocoon of female submission as a scorned butterfly — dagger in hand!” Nathaniel attempts to scold her for ditching work, but she quickly wraps him around her little finger, sending him out of the room but telling him to walk slowly: “I want to watch those pants move.” (Damn… I kind of like this new, confident Rebecca.)

She assembles her girl group — Paula, Heather and Valencia — to proudly announce her master plan to destroy Josh: She wants to mail him a bunch of cupcakes made of her poop. (Um…) The other ladies are confused: “Is the pooping Step One?” Valencia asks. Rebecca gets defensive, but she eventually moves onto Plan B: Get an actor who looks just like Josh and shoot a fake sex tape with him, where he’ll shout out that he hates Jesus, ruining Josh’s shot at becoming a priest. It’s not… great? But her friends decide to go along with it for now, figuring that she’ll come to her senses soon enough. (Hmmm… have you met Rebecca Bunch?)

During their auditions for a Fake Josh, they stumble upon a gem in Colin Crowley, a scarf-wearing British actor who looks exactly like Josh (also played by Vincent Rodriguez III). Once he proves he can nail an American accent, he gets the part, and the girls keep waiting for Rebecca to call the whole thing off, but she shows up on the set totally nude and ready to shoot. A fed-up Paula finally shuts everything down and sends Colin home, asking Rebecca why she’d want to humiliate herself like this. Rebecca breaks down and admits she just wanted to be near a Fake Josh, since she hasn’t seen the real Josh since he left her at the altar. 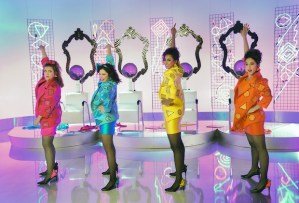 The girls help Rebecca recover with a night of drinking wine and complaining about how terrible men are, leading to the next number: “Let’s Generalize About Men,” a peppy, ’80s-style song that tweaks the temptation to make blanket statements about the male gender. (“Let’s take one bad thing about one man/And apply it to all of them!”) Rebecca admits she’s off her game, and an offhand comment from Valencia sparks an idea for Paula: What if she sues Josh Chan for breach of contract? She could humiliate him in court and expose him as a cad, all while maintaining her dignity.

Rebecca seems to be onboard, and she and Paula start formulating a legal strategy, but she’s not ready to give up playing dirty yet: She goes ahead and sends Josh a batch of poop cupcakes, letting out an evil giggle of triumph. Sigh… so much for maintaining her dignity.

* Paula worked to forgive her husband Scott for his affair with Tanya, in her own Paula way: She made him sign in when returning home each day and pass a rigorous lie-detector test before allowing him back into bed with her. But how gross was it when Paula suddenly demanded he call her “Tanya” in bed? (Ew!)

* Darryl and White Josh’s romance hit a speed bump when Darryl saw White Josh’s passion for launching a line of ant-based protein bars as an obstacle to them having a kid together. Darryl, as usual, went overboard, donning an anteater costume and handing out White Josh’s protein bars without his permission. They sorted it out in therapy, though. (But where is White Josh getting all those ants from?)

* I like the new Rebecca-Nathaniel dynamic, with him chasing her (and sending her gift baskets of artisanal pears), and her keeping him at arm’s length. I know these two are going to hook up eventually… but the mating dance is nice, don’t you think? And did you notice the strummy guitar from “Let’s Have Intercourse” playing when Nathaniel dropped by her house mid-jog?

* Rebecca is still lying to Paula about who Robert is. (He’s the professor she slept with at Harvard, but she tells Paula “Robert” was her old dog — the same lie her mother told Josh!) This is going to come back and bite her, isn’t it?

How crazy were you about Crazy Ex‘s Season 3 premiere? Give it a grade in our poll, then drop your thoughts in a comment below.