You’d think that a cancer scare would have to be the worst part of anyone’s day. But that just isn’t how Grace Adler rolls. So in Thursday’s Will & Grace, her unnerving trip to the gynecologist was overshadowed by an unexpected reunion with ex-husband Leo (Harry Connick Jr.) that was so fraught, it left her eating strawberry ice cream with chicken satay for a spoon!

It all started going downhill for Grace when she got so dolled up for her doctor’s appointment that Jack quipped, “If I was straight, I’d stare at you like a creep and tell you to smile more.” Next thing she knew, she was waking up from a biopsy of her left breast — the big one, she noted worriedly — and being informed by Nurse Sheila (Laura Kightlinger, reprising her droll role) that she had cancer. Or, rather, there was a very, very slim chance that she did. Oh, and her emergency contact was there. “Good,” said Grace. “I need Will.”

Only, of course, it wasn’t Will who was there, it was Leo. “How could that be?” Grace wondered. “I told Karen to… [Beat] Oh, that’s how.” Once Leo had escorted Grace home, she sent him packing, noting that one of the upsides of being single was learning to get through a crisis alone… then wailed to Will that she “almost died today!” After saying hi to his ex’s bestie, Leo took his leave, but not before suggesting that Will should have been Grace’s emergency contact even when they’d been married. 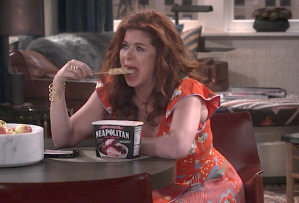 Later, when Will found Grace eating her horrific ice cream-and-Thai combo, he assumed that she was anxious about getting her biopsy results. But no, the results were already back — negative. She was just thinking and rethinking about what Leo had said — that their marriage had been doomed by her and Will’s weird closeness. Was he right? Are they weirdly close? No, Will insisted, even as Grace licked ice cream off his finger. All that mattered, he added, was that she knew the truth. She didn’t have to explain squat to Leo.

Which meant that obviously Grace was going to explain to Leo how wrong he was. Making a beeline for his office, she first accidentally knocked over his desk model of the human body’s internal organs, then deliberately tried to knock down his assertion about her and Will. To her surprise, he agreed — their marriage hadn’t ended because of her and Will, it had ended because of her. Ultimately, she agreed — she just hadn’t been able to forgive his infidelity. “You took my heart,” he said as she went to leave. He only meant that she’d forgotten to put back the heart from his model. But it was clear from their sexy goodbye kiss that the old flames were still at least kinda hot for one another. 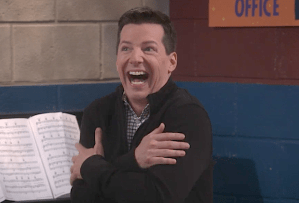 Meanwhile, Jack started “Emergency Contact” on a high since “technically, [he] probably booked” a regional dog-food commercial. Alas, he couldn’t celebrate with Karen, who readily called in sick. (“Cough… cough… I sprained my ankle” went the message she left Grace.) He had to work a temp gig as a rehearsal pianist… which turned out to be a gig teaching drama at the Bronx Boys and Girls Club. There must have been some mistake. “I used to teach, now I do,” he explained to Alvin, the fellow in charge. “You probably don’t recognize me from the regional dog-food commercial I’m about to get.”

Cue Jack getting a text informing him that he hadn’t gotten the commercial, and boom! He was teaching drama at the Bronx Boys and Girls Club. After warning the kids that showbiz was rejection, rejection, rejection, he urged a young vocalist to get over what the pros call performance anxiety and “what my friend Will calls date night.” When the nervous youngster then stunned the room with a beautiful acapella rendition of Michael Jackson’s “Ben,” Jack “got the chills,” he said, mainly because it meant that “I am an incredible teacher!” 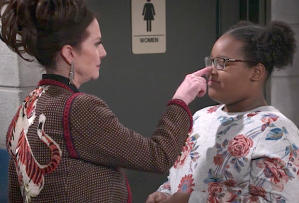 When Karen stopped by the Boys and Girls Club to wait for Jack, she at first put on her mean routine with a tween girl who asked why her friend was at the lady doctor. “Why does anyone go to any doctor?” the boozehound spat. “Fear and pills.” But once she realized that the girl had gotten her first period and had no one to talk to about it — not even “a husband or a lover” — she stepped up and helped her out, even recalling how, when she’d gotten her first period, her mother had poured drinks for everyone in the neighborhood “except the anxious 12-year-old who needed it most.” In the end, the kid sweetly drew the conclusion that Karen wasn’t nearly as mean as she pretended.

So, what did you think of “Emergency Contact”? Are you hoping Grace and Leo will become exes with benefits? Aren’t Jack and Karen plus kids a hoot? Hit the comments.