Thursday’s episode — appropriately entitled “Phil” — showed us Phil’s life apart from her daughter, playing cards with her friends and volunteering as a museum tour guide. But it also showed us the melancholy aspects of Phil’s life, as she got caught trying to lift an Egyptian ring from the museum’s collection and then intentionally stepped into a hole in the parking lot, taking a nasty spill and ending up in the hospital. (Sam considered putting her in a retirement home, but ultimately decided to ride it out with her mom living next door.)

TVLine reached out to Celia Imrie, who plays Phil, to discuss her big showcase. (“I haven’t seen any of it,” she deadpans, “so you’ll have to tell me if I’m any good or not.”) Below, Imrie — a celebrated actor in the UK with an Olivier Award to her credit — takes us inside Phil’s mindset and reveals her unique working relationship with Adlon: “Pamela and I are quite rude to each other, which I love.”

TVLINE | When did Pamela first tell you she was planning an episode centered on Phil? Was this in the works for a while?
No, I drive her mad all the time, and she raises her eyes to heaven, because I say, “Oy, I’ve only got one line in this episode? What’s going on?” [Laughs] I’m quite stroppy with her, because I want more. So when I saw an episode just called “Phil,” I thought, “Well, how marvelous.” But I’m still greedy for more. I love the character. 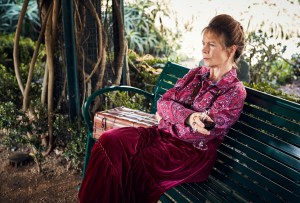 TVLINE | We saw a different side of Phil this week: playing cards with her friends, volunteering at the museum. Did you already have a backstory for Phil in your mind that we hadn’t seen on screen?
Not really. I have met Pamela’s real mother, and that gives me food for thought… although I’m not doing an impersonation of her. In fact, we had great fun this season, because we went out to dinner together and went to the theater together, and it was great. But funnily enough, I hadn’t. I love the sort of roundabout and helter-skelter path Pamela takes me on. I have no idea what’s going to happen next. And in a way, I quite like being surprised.

TVLINE | At the museum, Phil gets caught stealing an ancient Egyptian ring. I didn’t have her pegged as a kleptomaniac, did you? Was that just a cry for attention?
I think it’s quite childlike, actually. I find a lot of her behavior quite childlike, and I think she was just overcome, and thought it was so gorgeous. She didn’t mean to do it. But I think when she realized the impact of what had happened, then I think the trip down the hole was more of a cry for attention.

TVLINE | We’ve had indications in the past that Phil’s not all there, but she’s also still sharp in a lot of ways. She sensed that Sam had a new romance before she even told her.
Oh, sharp as a tack, absolutely. But then I think possibly that’s what happens when people get older, you know? The mundane things in life sort of trip them up, but they’ve always got that extra magical insight to their children. 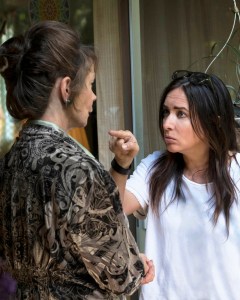 TVLINE | The Sam-Phil relationship is interesting: Sam treats her mom like a nuisance, and Phil’s had unkind words to say about her daughter. But there’s still a foundation of love underneath all that, right?
Oh, total. I think it’s underlying love, no question. Which enables them to be quite sarcastic about each other. Sometimes the things that Phil says are quite cruel, really. But there’s no question that she absolutely loves her, and is enormously proud of her, and sometimes perhaps doesn’t say it enough. But when she says she’s proud of her and she loves her, I think that’s absolutely true.

TVLINE | Pamela has directed every episode this season. What’s the atmosphere like on set? It feels very intimate, very much like a real family.
Yes, she’s extraordinary. She’s greatly loved and admired by her entire crew. She knows them all. And now the great joy is, having done one season, we all know each other quite well. Therefore, Pamela and I are quite rude to each other, which I love. Because it just makes us laugh. But she knows jolly well that I will do anything she asks me. She doesn’t pull her punches, either. I’d just been playing Goneril [in King Lear] at the Old Vic in London, and if ever I get a bit too theatrical, she says, “Now stop all that Goneril-ism! We don’t want any Goneril-ism in here!” She just makes me roar. That means I’m not allowed to do any more acting. She doesn’t want any of that nonsense. [Laughs] And I take it from her, because I admire her so much. I really do think you can’t liken it to any other show. It’s wonderfully refreshing, I think. And I’m just mighty proud to be in it.