The Flash opened Season 4 by revealing that in this six months since Barry volunteered himself to occupy the Speed Force prison, Iris has been holding down the fort while Wally/Kid Flash and Cisco/Vibe mix it up with malevolent metas. 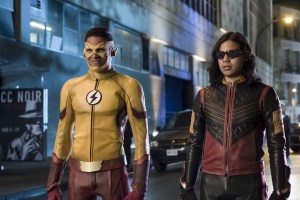 And Team Kid Flash/Vibe/whatever has been getting by fine enough (with a 66 percent success rate) — until an armored samurai swooped into town and scoffed at the costumed heroes standing before him. Delivering to the streetscape a seismic smackdown with his sword, the samurai demands a face-off with the Flash aka “the best” — “or else” he will lay waste to all of Central City.

This is when we (a gobsmacked Iris included) learn that Cisco all this time has been chipping away at a means to not only retrieve Barry from the Speed Force but make it so that no one (e.g Wally) gets sucked in to fill the void left by his exit. Cisco explains that his idea isnt foolproof/tested, and that’s why he kept mum all this time. Iris is bearish on the notion for multiple reasons, namely the fact that Barry being “gone” is one of the few things they know for sure. (As she explained to Joe in an earlier father/daughter chat, Barry told her to keep moving forward, and that is what she has been doing.) As such, Iris urges the team to focus on other ways to take down the samurai. 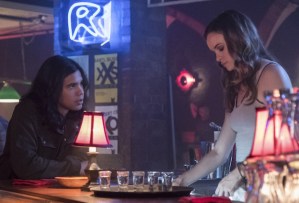 Cisco however forges ahead, and to bring his idea to possible fruition, he needs a few things — the brilliant mind of a former colleague included. Tracking down Caitlin at a dive bar, he asks if she has licked her Killer Frost problem (and if so, why hasnt she reached out), but she eludes his inquiry. Cisco lays out the dire situation, that he has a way to save Barry but needs her help. And with a smile, she agrees.

The next day, Cisco, Caitlin and Wally convene at the test track where Barry first kicked his speedster tires. There, Cisco explains to Joe his decision to puruse this possible solution, while Caitlin apologizes to Joe for what she, as Killer Frost/Savitar’s lackey, put both him and Cecile through.  Cisci then fires up the gizmo he has concocted, and… nada. No results. It appears to be a bust. But unbeknownst to them, a portal has opened up downtown, from which a bearded and buck-naked Barry has materialized — to zip straight out of town. 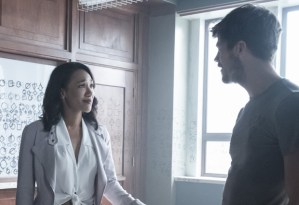 Back at S.T.A.R. Labs, Iris blasts Cisco for proceeding behind her back, and apparently for naught, and then she has a few words for Caitlin, who claims that “we” were just trying to help. Cisco is on the verge of railing at iris for “not even wanting Barry back” when Cecile phones Joe about Barry being found 300 miles away. Alas, the young man they find at the CCPD sure looks like Barry, but his mind seems scrambled, propelling random thoughts from his mouth such as “Nora shouldn’t be here,” “Your honor, I’m innocent” and much talk of “melting stars,” all peppered with intermittent sing-songy rhyming of words and as he scrawls odd symbols all over the room. When Barry is brought back to S.T.A.R. Labs for examination, a teary Iris in private explains how she kept “moving forward” in part because “if I stopped to look back, I would remember that you’re not behind me anymore.” But despite her pleas to return to his old self, Barry appears largely unmoved. And after a violent outburst, he lands in a pipeline cell.

Sparked by something Caitlin says, Cisco thinks he has cracked the code of what Barry is scrawling… only to have the computer cough up the phrase, “THIS HOUSE IS BITCHIN.” Iris decides that the only way to motivate the real Barry to emerge is by putting her life on the line, so she tells Barry, “Come get me” before turning herself over to the samurai. Lopped in by a desperate Joe, Barry eventually “snaps out of it,” busts out of his cell, grabs his new suit and races faster than ever to save Iris, pummeling the samurai at a remote wind farm. Afterwards, the team realizes that this threat was not human but a robot. But controlled by whom, and to what end? Also, Joe asks: If Barry remembers nothing about his time between entering the Speed Force and saving Iris just now, how did he know she was in jeopardy?

Caitlin promises Cisco that she will return to S.T.A.R. Labs tomorrow (“We back, baby!”), but first she swings by the bar, where Norvok, the milky-eyed dude who stared down Cisco earlier, rebuffs her wish to quit doing the bidding of someone named Amunet. Pressured by Norvok, Cailtin in nearly a blink of an eye transforms into Killer Frost, to give the link a literal brain freeze, warning: “You won’t like me when I’m frosty.” Moments later outside, Killer Frost is rarin’ to “have some fun” when she doubles over in pain, uttering, “No, not yet… Not again,” as she switches back into normal Cailtin mode.

Barry and Iris meanwhile return to the loft, where Iris had not been able to sleep in their bed, alone. “It’s been really hard,” she explains — to which Barry coolly suggests the ordeal turned out to be a “blessing.” Since returning, he feels like “everything that was wrong… has washed away.” Now all he sees is her/them and their future together.

As for the “samuroid” mystery, in the final moments we see a female known as The Mechanic (Dominion‘s Kim Engelbrecht) tend to an identical android and then report to her boss that his plan worked and The Flash is back in Central City. “What is our next step?” she asks. “I’m thinking…,” says The Thinker (The 100‘s Neil Sandilands), spinning around in a chair to reveal himself.

* Julian has moved back to London, we learn.

* It would seem that besides the Canaries and Slade Wilson, at least two more of the Arrow characters caught in the Lian Yu explosion survived, based on whom Cisco said has been helping him with his new project.