Monday, we began the third and final week of the Blind Auditions for Season 13 of The Voice, and though I think we most of us can agree there are a few promising singers in the mix — including but not limited to Anthony Alexander, Moriah Formica and Chris Weaver — have we really heard The One yet? That, I’m not so sure about. (Then again, it wasn’t until the Battles that I realized Chris Blue was The One last season; I’m slow that way.) Are you zeroing in already on a likeliest candidate to take the title? Before you weigh in in the comments, let’s review the new batch of vocalists advancing from Monday’s Blind Auditions to the Battles.

Chloe Kohanski (Team Miley), “The Chain” — Grade: B+ | Flying solo after being in a blues band, the 23-year-old psych-rocker started off her Fleetwood Mac cover sounding a little iffy but soon settled comfortably into a lower register that called to mind Melissa Etheridge. And, when Chloe really let loose on the last chorus, it sure seemed like she could give fellow rocker Moriah Formica a run for her money.

Dennis Drummond (Team Blake), “She Talks to Angels” — Grade: C+ | Tackling the Black Crowes, the 6’8” blues man demonstrated that he has a lived-in, genuine-sounding voice. But unfortunately, it isn’t a voice that I’ll remember tomorrow. And can you really see him making it through the Battles, even with bandmate Adam Wakefield’s savvy old coach guiding him?

Rebecca Brunner (Team Blake), “Believer” — Grade: C- | “I’m just gonna pour my heart out on the stage,” said the 22-year-old before beginning her performance. And while I don’t doubt for a minute that she did that, her doing so… uh, just didn’t sound tremendously pleasant. She seems like a sweet, sunny person, so I feel bad having disliked her audition so much. Trouble is, I did. 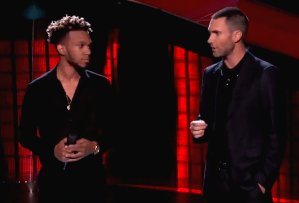 Ignatious Carmouche (Team Jennifer), “Latch” — Grade: B | The winner of Season 12’s Snapchat Voice competition sounded fine from the start, but his vocals were nothing we hadn’t heard before (and better). Only when he leapt up into his falsetto did my ears really perk up. Got a feeling guys like Anthony Alexander and Davon Fleming are gonna leave him in the dust sooner than later.

Brandon Brown (Team Adam), “Georgia On My Mind” — Grade: B | At first, this Bronx violin teacher had me convinced he was going to be great. Then it turned out he was only going to be kinda pretty good. All the judges but Miley swiveled for him, likening his voice to that of old-school soul legends like Donny Hathaway. But to me, he was just a decent singer doing better-than-average karaoke.

Ilianna Viramontes (Team Miley), “New Soul” — Grade: B+ | Since this teen missed her high school graduation to try out for The Voice, it’s a good thing she aced her audition. (OK, B-plus’d.) Not only is her voice strong, it’s quirky and memorable — sorta like Fiona Apple might sound if she was cheerier.

Whitney Fenimore (Team Adam), “Hold On, We’re Going Home” — Grade: B+ | No sign during this performance of the on-stage panic attacks that once sent this singer spiraling into depression. Here, she came off polished as hell — and earned bonus points from future coach Adam for doing the Drake featuring Majid Jordan hit the way Christina Grimmie once had: Americana style. 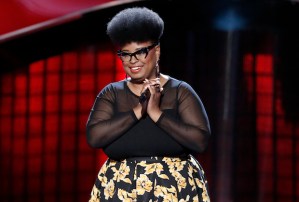 Meagan McNeal (Team Jennifer), “Can’t Feel My Face” — Grade: B+ | Like future coach Jennifer, I was on the fence about Meagan till she hit that big-ass note about midway through her soulful Weeknd redo. Then, done. Sold. Love her style, and the voice is in there — brassy and Aretha-like. She’s just gonna need JHud to pick her songs to showcase it better.

Jon Mero (Team Adam), “Versace on the Floor” — Grade: A- | I think I’m pregnant after this performance. It wasn’t Jon’s falsetto that did it, impressive as that was, it happened when Jon started singing more powerfully in his lower register. That shizz was so hot, it made you wanna drop your dress even if you were wearing Nacho-stained sweatpants.

So, who did you think gave the night’s best performance? Vote in the poll below, then hit the comments: Do you think we’ve already heard the winner of Season 13?